Slickly-made and with engaging characters, these two both revolve around Department Q, a department more or less created in order to give dysfunctional detective Carl Morck (Kaas) something to do when he comes back after almost dying when a stakeout goes wrong. He gets stuck in a basement, filing cold cases with fellow loser Assad (Fares), but refuses to accept an easy, deskbound life. The first case that stands out is the disappearance of up and coming politician, Merete Lynggaard (Richter), who vanished off a ferry five years previously. Ruled suicide, the verdict doesn’t sit well with Morck who begins, despite his superior’s increasingly-loud demands, to pick away at the incident, intent on a better job than was done at the time. 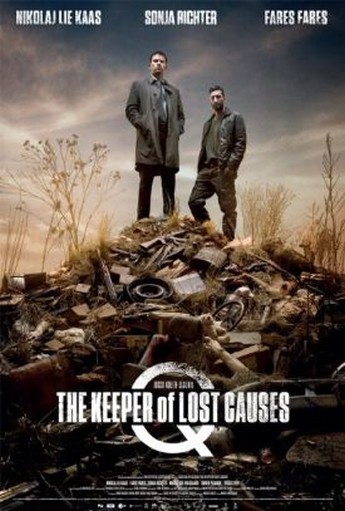 After the fame of that case, Morck is approached in the street by a drunk, who wants his help looking into the murder of his teenage children over 20 years previously. The detective is uninterested, until the man turns up dead the next day, apparently having committed suicide. With interest piqued, Morck digs in – even though someone was already convicted of the crime. Was he a patsy? If so, who set him up to take the fall, and what chance is there of getting to the truth, two decades later? Fortunately, turns out there was someone who could attest to the truth, and it becomes a race to see if Dept. Q or the real, and now well-connected, perpetrator, will get to her first.

The second film became the highest-grossing Danish film ever in Denmark, and was actually the one we saw first, entirely unaware there was a predecessor: hey, we just like Scandicrime. They both work fine as standalone, though I’d recommend watching them in order, to understand the background of where Morck comes from, and why he’s such a prickly personality. Based on a popular series of novels by Jussi Adler Olsen, I kept getting notes from other Scandicrime shows: Morck, in particular, seems like a cross between Sarah Lund from The Killing and Halgrim Hallgrimsson of The Eagle, sharing the former’s social ineptness and investigative smarts, with the rugged masculinity and don’t give a damn approach of the latter.

If the hero is a tad over-familiar, there’s enough new and well-handled here to more than make up for it. There’s a nice contrast between Morck and Assad, though both are clearly outsiders in the police ranks. The first film is likely the stronger, in part because we become aware of the hellish nature of what really happened to Merete, well before the cops get wind, and it’s truly disturbing. There’s also a glorious well-filmed car-crash, seen from the view of the victims. The follow-up isn’t as interesting, though we enjoyed seeing Asbaek, with whom we’ve grown familiar in his role as king of spin in Borgen, Denmark’s answer to House of Cards. He’s not as affable here, shall we say. A good introduction to the genre, and even those aware of the field should find enough for a satisfying double-feature.