Bollywood horror films start out from behind the eight-ball, due to the largely restrictive censorship climate in that country. Now, that doesn’t strangle the genre at birth, because you don’t necessarily need to show everything explicitly to generate terror: see the shower scene in Psycho, for example. But the good old-fashioned gross-out is an important weapon in the horror film-maker’s arsenal, especially because very few directors are at the level of Alfred Hitchcock. I think it’s certainly fair to say Saif isn’t, and the scares resulting from this are mild, at best. 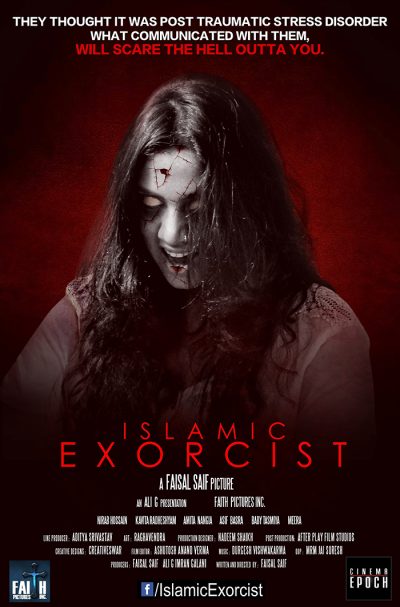 It’s a story revealed mostly in flashback. Journalist Natasha (Meera) visits the home of Ayesha (Radheshyam), seeking to learn more about a recent incident. Ayesha’s husband, police officer Sameer (Hossain), shot their adopted daughter, Anna, claiming she was possessed by a demon. Natasha has a particular interest in this because, as she tells Ayesha, she has a relative exhibiting similar symptoms. Having successfully won Ayesha’s confidence, the writer is then told the story of what led up to the shooting, beginning with the couple moving into their new home.

I hate it when I guess the ending of a movie half-way through. I hate it more when I’m not even serious about it. Usually, this follows my turning to Chris and starting my facetious (but ultimately correct) prediction with, “Wouldn’t it be funny if…” Here? Nailed it. Admittedly, this twist may help explain some of the otherwise questionable aspects of the movie. For instance, it appears that Indian adoption protocol involves simply finding an orphan in a playground and taking her home with you. It requires slightly less paperwork than getting a puppy in the West. And certainly, fewer vaccinations.

Other aspects are perhaps similarly a result of cultural dissonance to a Western viewer. The conversation between Sameer and his colleague about a murder victim, includes apparently nonsensical lines like – and I rewound this to make sure I got it right: “Don’t burn my asshole please. I feel like fantasizing her. Hoe could her boyfriend kill this hot-looking chick without fucking her?” There’s also a whole Shia vs. Sunni Muslim thing: largely impenetrable to me, but apparently serious enough that the director supposedly received death threats for daring to suggest (okay, flat out stating) that Shia Muslims do black magic. I say “supposedly”, since this feels a William Castle-esque publicity ploy, like the “true story” title with which the movie opens. And the online petition to ban it has… two signatures. Then again, loony religious fundamentalists do loony things.

While the setting was original enough to keep us watching – if you see only one film about possessed Muslims this year… it’s almost certainly going to be this one – the problems are hard to overlook. They begin with the really crappy dubbing into English, noted above, which seems particularly unnecessary, when other sections are left subtitled. The pacing is torpid. Even at 83 minutes, it drags horribly for a good hour or so before much of anything happens. As mentioned, Saif isn’t Hitchcock, and the efforts at generating a spooky atmosphere are mostly unsuccessful. The “spooky, long-haired girl” trope is clearly not yet ready to be dug up from the grave to which it went through in about 2004, killed by relentless over-use. And the obvious lack of a budget is another factor which leaves this short, in terms of offering anything meatier.

Hey, at least there weren’t any musical numbers.