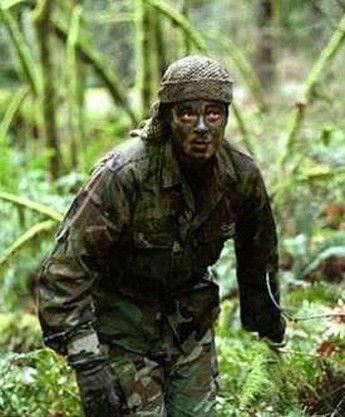 The trailers made this look like First Blood meets The Fugitive, with Jones as LT, the trainer called in to track down former charge and now military assassin, Hallam (Del Toro), who has gone battle-crazy and started gutting elk hunters. The trailers were right, though it takes its own sweet time getting there. After a lengthy prologue in the Balkans, some creeping around the Pacific Northwest, and the army suddenly taking back their man, it looked to be heading into more interesting, Manchurian Candidate territory. But then Hallam escapes, the military vanishes entirely from the plot, and it becomes man vs. man, in both urban and rural settings.

Certainly, both leads bring the required amount of intensity to their role. I think the fault lies largely with a script which glosses rapidly over things like Hallam’s motivations and purpose, that deserve more explanation, while stretching out scenes of doubtful relevance, such as the opening. Oddly, they also make a point of saying that LT has never killed a man…yet he’s supposedly teaching elite soldiers how to do it? And more than once, his fear of heights crops up, which would be clumsy foreshadowing if anything ever came of it. It’d take more than a couple of realistic-looking and savage knife fights to justify such inept plotting.