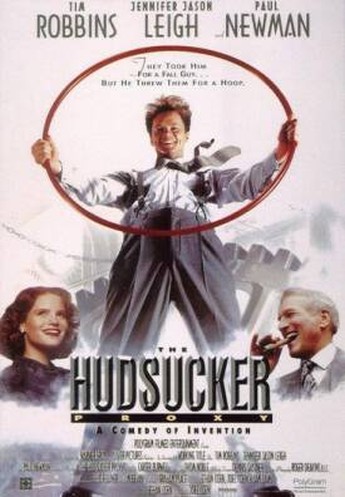 As much a satire on the world of big business, both then and now, as anything else, it’s the story of Norville Barnes (Robbins), a simple man who becomes chairman of the Hudsucker Corporation near the end of 1958, after its founder leaps from a 44th-floor window [or 45th, including the mezzanine], and the remaining directors want to drive the stock price down so they can buy it cheaply. At first, everything seems to be going well, as fast-talking journalist Amy Archer (Leigh) exposes the new chairman for the inexperienced schmo he is. However, his invention of the hula-hoop becomes an overnight sensation and the company’s stock soars, much to the chagrin of Sidney Mussburger (Newman), the director behind the scheme.

We were also stunned to notice, on recent re-viewing, the presence of Anna Nicole Smith, in a minor role as Barnes’ model girlfriend; this must easily be the best film in which she ever appeared! Co-written by the Coens and Sam Raimi, it’s a throwback to the screwball comedies of an earlier era, with hints of Frank Capra and Preston Sturges, as well as the mythic quality at which the Coens excel [see also O Brother and Raising Arizona for the best examples in their filmography]. There is an obvious contrast between the straightforward character of Barnes, and the dazzling array of cinematic techniques which the Coens throw into the mix, with a set design that is neo-fascist, filtered through the mind of Terry Gilliam.

The results are among the most beautiful of films to look at [and to listen too as well, Carter Burwell’s score mixing seamlessly with Khachaturian], but the solid moral anchor provided by Barnes keeps the film firmly-grounded. One can only wonder shudder at what it might have been like, if his part had gone, as producer Joel Silver wanted, to Tom Cruise. Fortunately, it is instead the sort of film that leaves you with a spring in your step, a smile on your face, and a warmth towards your fellow man, only otherwise obtainable through beer.