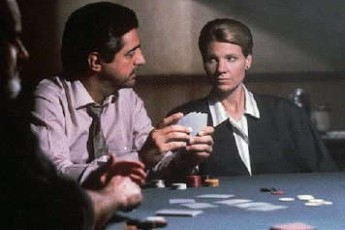 I came to this one the long way round, via most of Mamet’s other movies, and in hindsight that might have been a mistake, because the material inevitably feels less fresh, even though it was his directorial debut. [The most obvious variation on his theme is The Spanish Prisoner, with its similar tale of an innocent caught up in a world so beautifully constructed you can only admire it.] Even allowing for this, there are weaknesses, most notably in the character of heroine Dr. Margaret Ford (Crouse), a psychiatrist led into the duplicitous world of Mike (Mantegna), a con-artist who bedazzles her with his tricks and leads her into his world. Or does he?

By now, I’d seen enough of his films to know the answer to this question with some certainty, and Ford seems as much a con-artist as Mike with her psycho-babble – I presume its stilted nature is Mamet making a point, but it leaves it hard for the audience to connect with her. Mantegna and Nussbaum are great as veterans of the con game, and you also get to see a very young-looking William H.Macy as a soldier. The climax revolves around one single word, and isn’t entirely convincing (multiple gunshots in a secure area of an airport, which no-one notices?), yet if the destination is somewhat familiar, the scenery and travelling companions make the journey worthwhile.