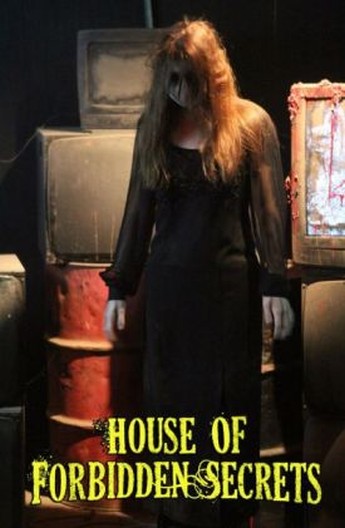 There are some elements of this that work extremely well, not least seeing Thorne back on the big screen after a very long time away. Most famous – okay, probably entirely famous – for her depiction of Ilsa in She-Wolf of the SS and its sequels, she had not appeared in a film since 1987’s Real Men. Here, she plays a brothel madam, the evocatively-named Greta Gristina, whose house of ill-repute was the site of a massacre after she pissed off a local do-gooder, Elias Solomon (Temple). Decades later, it has become the Shadowview Manor, an office/retail complex, whose inhabitans include a psychic, Cassie Traxler (Santorella) and a new security guard, Jacob Hunt (Steele). After one of Cassie’s seances goes awry, a portal through time is opened, allowing malevolent forces to enter the modern era, while Cassie and Jacob get to travel back and witness the massacre in person.

Sheets has been churning out video horror films for decades, IMDb listing almost forty features going back to 1985’s Blood of the Undead. Looking through the list, I just realized that, I had actually seen one of his earlier works, Prehistoric Bimbos in Armageddon City, a few weeks ago, but hadn’t made the connection to this until now. Certainly, on a technical level, he has come a long way, but to be honest, that isn’t saying much, since PBiAC was strictly amateur-hour. This starts off particularly shaky, and there seems to be an awful lot of scene-setting until the seance that kicks off the meaningful part of the plot. The gap between experienced actors like Temple and Thorne, and the two leads is also painfully obvious, with Steels in particular, woefully overmatched for most of his scenes.

It’s clear that the aim is a homage to the Italian horror films made the likes of Lucio Fulci – most obviously, in the soundtrack composed by Fabio Frizzi, who was also responsible for the scores to City of the Living Dead, The Beyond, etc. As such, it’s probably quite successful, even if the “intestines” here never even faintly resemble the real thing. However, the problem is that I was never much of a fan of Fulci and his colleagues at the time, and so watching a low-rent (if well-intentioned) knock-off of their genre isn’t exactly my cup of tea. That said, seeing Thorne – who still looks amazing, considering she’s now in her seventies – strut her stuff made this one worthwhile, and it’s a shame the film didn’t focus more on her than the two, generally uninteresting, younger leads.