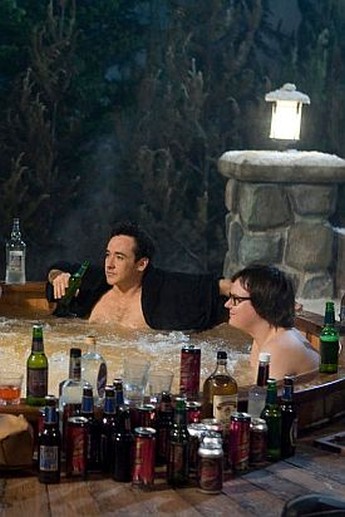 This is not much more than an unashamed blast of nostalgia for the eighties, thinly disguised as a morality story. Four stereotypes guys, none of whom are exactly happy with their lives, get thrown back to 1986 after taking a dip in the titular device. They end up at a ski resort in 1986, a location which has fond memories for the three veterans, remembered as a place “where no one got carded and everyone got laid.” However, they end up reliving a particular weekend there which has mixed memories for them. Adam (Cusack) broke up with his girlfriend and was stabbed with a fork for his pains, while Lou (Corddry) was beaten up, more than once, by a ski-patrol jock. At first, the quartet try to make things happen exactly as they did, for fear of jeopardizing their future, but their previous experience makes that impossible. Lou decides that he is instead going to change his destiny, starting by beating up the bully.

I have to agree with James Berardinelli’s review, where he says this “feels less like it has transported us back in time to 1986 than that it has taken us to an ’80s-themed party.” Look! Men Without Hats on the soundtrack! One can only speculate whether, in 2036, someone will be making a film looking back in the same way at the present time. Look! Lady Gaga on the soundtrack! But it doesn’t take a time machine, or even a sonic screwdriver, to figure out where this is going to end up. Its immense predictability is exceeded only by a lack of inventiveness which extends no further than having Crispin Glover, a veteran of a far better time-travel film, in a supporting role. The moment which sticks in my mind most is Lou projectile-vomiting onto a squirrel, though much like The Hangover, it is redeemed (albeit to a lesser degree) by decent performances, particularly from Corddry, and Duke as a musician who gave up his passion for marriage, regretting it ever since. With a better script, it could have gone somewhere, instead of being a forgettable, if largely painless, way to spend 90 minutes.