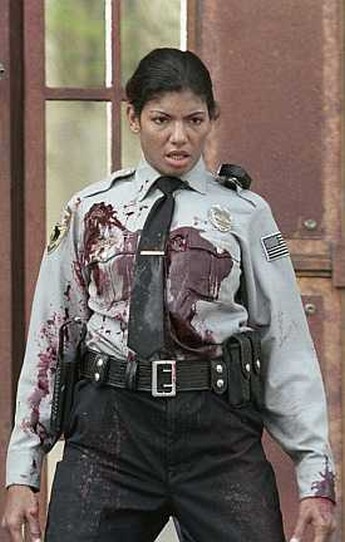 There’s a point here where I found myself irrevocably distracted by coming with a list of ways the bad guys could have achieved their objectives in much simpler fashion. I mean, rather than kidnapping the wife and daughter of local police chief Talley (Willis), in order to get him to interfere in a siege taking place at a house where their accountant has a DVD of potentially compromising files, “waiting to see what happens” might be a more logical, and certainly less expensive or troublesome start, no? That may seem a small criticism, but it basically drilled the heart out of the film for me, since such contrivance made suspending my disbelief finally impossible. And it was already strained at the seams, with Talley a former – hey! – hostage negotiator, who retired to a sleepy suburb after a previous siege went horribly wrong. What are the odds against that?

I did like the idea of Talley struggling to deal with two hostage crises simultaneously, and Siri brings a European panache to proceedings – love those opening credits [Siri also directed The Nest, which is the best action film you’ve never seen]. There’s also a nice sense of everything being out of control: Talley, and certainly not the siege-takers inside, who are as much victims of their own incompetence as anything. Well, except for Mars (Foster), who is creepily psychopathic and, it’s readily apparent, is capable of random acts of cruelty at a second’s notice. Pollak’s role is limited, since he’s largely unconscious, though stages a miraculous recovery whenever he is needed by the plot. That kind of convenient script-writing irritated me, probably more than it should, but the concepts central to the story here just never quite seemed as well thought-out as they needed to be.