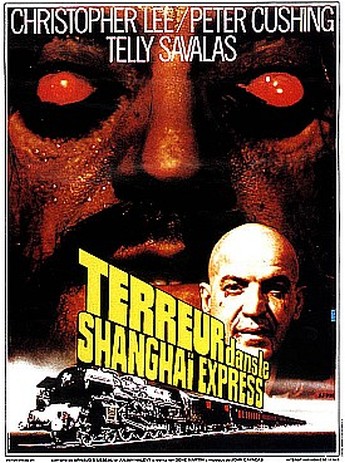 A fossil discovered by Professor Saxton (Lee) is packed aboard the Trans-Siberian Express, but even before they leave the station, dead bodies start to accumulate around the crate. Inspector Mirov (de Mendoza), along with Saxton and fellow British academic, Dr. Wells (Cushing) start to investigate, and find out that the fossil may be the host to a presence that has been waiting a very, very long time for this opportunity to escape, and is capable of taking over other hosts when necessary, and absorbing their knowledge. This leads to the best line – indeed, one of the finest in genre history. When Mirov asks Wells and Saxton. “But what if one of you is the monster?”, Wells shocked response, beautifully-delivered, is “Monster? We’re British, you know!” As the train careers through the Siberian countryside, can the threat be contained?

There’s only a certain number of times you can see the monster’s eyes flash red and the victim fall to the ground, before it gets old. That number is a) very small, and b) less than it occurs here, and even with Lee and Cushing, an absolute pleasure to watch as always, the movie struggled to hold my attention. The middle chunk of the film, in particular, is sluggishly-paced, with not much going on once the central premise has been established. Admittedly, a NyQuil-dosed wife, snoring gently beside me, probably didn’t help, and neither did the print quality – often an issue with public-domain films such as this – which was so dark, you kept thinking the train had gone through a tunnel. Even given its age, this seems somewhat dated and restrained: in both the US and UK, it came out within a couple of months of The Exorcist yet in many ways feels like a throwback to the fifties, and is the worse for it.