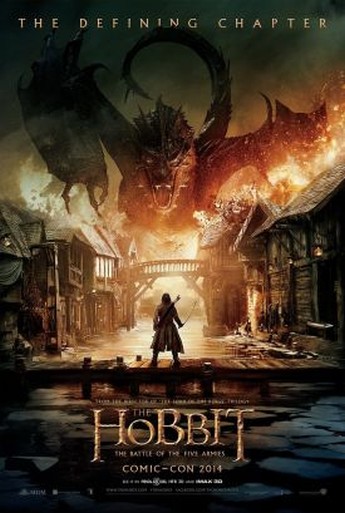 Between the LotR trilogy and this one, Jackson has been working in Middle Earth for 17 years. When he started, I was single and living in London. Got to wonder what he’s doing now. After a couple of relatively shaky entries, this does at least finish strong, without the same sense of padding which was a major problem in the first two movies. This hits the ground running – or, more accurately, flying and incinerating – with the attack of Smaug, and while the middle is largely waiting for the titular armies to show up, it doesn’t feel laboured. Instead, there’s steadily escalating tension, with the dwarves holed up in the mountain, the elves laying siege from outside, and the orcish hordes also heading to join the fray. Once things kick off, the battle ebbs and flows, a typically Jacksonesque spectacle. But with the orcs eventually prevailing, the dwarves under Thorin (Armitage) mount a desperate raid designed to ‘cut the head off the snake’.

By this point, you should know what to expect from Jackson, and he delivers: sweeping vistas, majestic battle scenes and a storyline that might as well have “epic” printed between each word. At 144 minutes, it’s the shortest of the six movies, but that’s not exactly a criticism. The focus here is better maintained, with a reduced tendency to drift off onto supporting characters of questionable purpose (though the interspecies romance between Killi and Tauriel still seemed odd: isn’t that, like, bestiality?). It was nice to see Christopher Lee show up [man, he’s sprightly for a 92-year-old!], though seeing him as a good guy was odd. Just throwing this out there, but in hindsight, Jackson might have been better to make this first, then LotR, considering how much foreshadowing goes on here. If this doesn’t entirely deflate the unnecessary bloat from what has gone before, it does at least leave you feeling somewhat sorry it’s the end of the road. Now, what about Meet the Feebles 2, Peter?