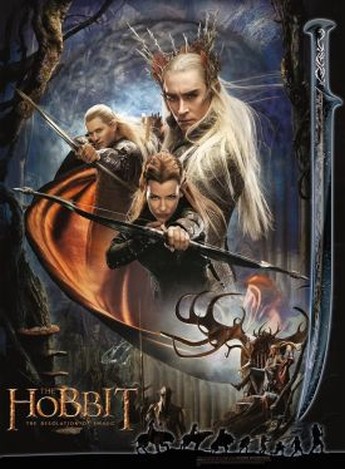 The second part is something of an improvement over the first, but on the other hand, there are still a couple of issues, which loom even larger this time around. We do get a slight “story so far” introduction, but we then bounce forward to follow Bilbo (Freeman) and the Seven Dwarves (or however many it is; I lose track) as they continue on their mission to… Er, what was it again? Something about a dragon? Oh, yeah. That rings bells. This time, they go through the Mirkwood, fend off giant spiders, get captured by wood Elves, escape, are pursued by Orcs – and that’s all before they get to the mountain with the sleeping dragon in it. Meanwhile, Gandalf (McKellen) peels off and leaves the little folk to the perils of the wood, for some inadequately described reason, but ends up going head to head in another part of Middle Earth, against what turns out to be proto-Sauron. It all ends – or at least, points towards the third and final installment – not quite with the “desolation” promised in the title, but I guess “Smaug gets a Bit Peeved” wouldn’t have got as many bums on seats.

Problem #1 is the sense, again, that they’re stretching a story too far. This is over 150 minutes, even discounting the ten of credits at the end, and a good chunk of it – in particular, the faffing around Esgaroth with Bard (Evans) – could be heavily shortened without any significant impact. Problem #2 is perhaps related, in that all that has been added, provides absolutely no extra heart – which makes sense, since it was basically JRR’s footnotes. Rings had any number of strong, interesting characters to carry the story; here, we’re two-thirds in, and we have not much more than a selection of interchangeable short people, plus a love triangle that seems more inspired by Twilight than Tolkein. But I don’t want to be too harsh, and I can’t honestly say the lengthy running-time dragged in the slightest. There are some excellent set-pieces, most notably the barrel-icious escape from the elves and what ensues, as well as the final encounter with Smaug, and I’ll be interested to see the third part. But that’s perhaps the biggest difference between this and Rings: I am merely “interested,” rather than “eagerly anticipating with a passion.”