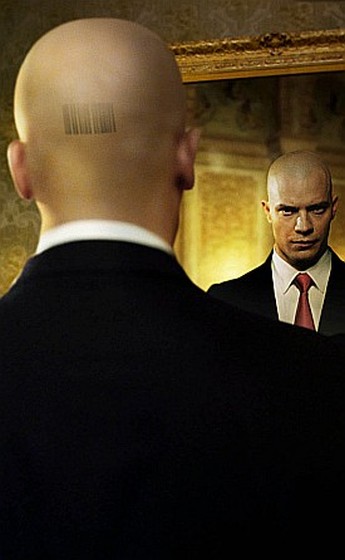 The nameless Agent 47 (Olyphant) is a ruthless assassin for hire, whose mission to kill the Russian president goes perfectly – until his target, whose head exploded in his cross-hairs, pops up giving a speech. It’s not long before 47 learns the first rule of assassination: kill the assassin. He’s clearly never seen Star Trek VI. He scoops up a Russian girl who seems to know more about what’s going on thant she admits (Kurylenko); on the other hand, there’s an Interpol detective (Scott), who has been tracking 47 for the past three years. Which you’d think would be relatively easy, since the bald killer has a bar-code tattooed prominently on the back of his head; given all the international jet-setting, you’d think someone might have spotted him at the airport by now. Such is a peril of adapting a video-game: what looks very cool on the X-Box, makes rather less sense in the real world, where CCTV and Interpol’s Most Wanted would cause this game to be over very quickly.

Of course, the game also encourages the use of stealth. The movie…not so much. Not when there are balconies to be leapt off, or windows crashed through [though we did laugh at Agent 47 interrupting a couple of kids playing Hitman] and while occasionally done with style and energy, there’s little here you haven’t seen a million times before. The plot thinks “confusing” means the same as “complex,” and we’re given little reason to care about any of the characters: Scott does better in this regard than Olyphant, who has the personality of a Twinkie – with whom, presumably, he shares a bar-code. The director apparently had creative control taken away, which may seem to give his something of a pass. However, it’s hard to see exactly what he could have done to salvage this ill-conceived and blandly executed project: we’ll just have to hope Max Payne proves to be better.