Milena (Sau) is an aspiring actress, who gets the lead role in an experimental play about human trafficking. It’s directed by the unconventional Federico Del Pino (Romano), who is intent on pushing Milena as far as he can to achieve authenticity. His questionable techniques appear to open up something in Milena, who begins to have terrible nightmares, in which she is called Laly and is being held captive as a sex worker in a house of horrors, along with a number of other women. These grim dreams become increasingly intense, to the point where Milena isn’t sure if they are just the product of her own subconscious, triggered by the role. Or is her life as an actress actually the dream, constructed by Laly as a Sucker Punch-like escape from her awful existence. 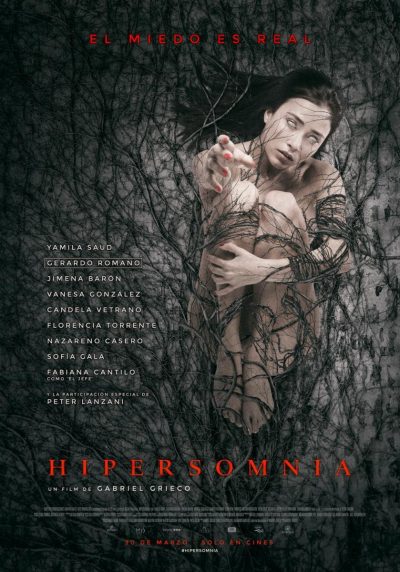 It likely counts as a bit of a spoiler, but damn it, I’m irritated enough that I’m prepared to take the flak. The truth turns out to be neither of the above. The film instead leaves Lynchville, takes a sharp right turn in the second-half and goes in a direction that is more grounded – yet, ultimately, significantly less interesting. It devolves into a relatively straightforward slasher, as the women run around the house, seeking to escape from their captors. The movie ends with a po-faced recitation of facts about sex trafficking in Argentina: the moral condemnation it wants to offer about the exploitation of women, would perhaps be a bit more credible, if not for the copious amount of nekkid babes to be found over the proceeding 85 minutes. I’m just saying’…

There are some creepy elements to be found, such as the customer at the house who is known only as “The Gardener,” whose reputation is such that the mere mention of his name terrifies the women. However, the amount of narrative contortions through which the story has to go, in order for the explanation and conclusion to make anything even approaching sense, threw me off the ride, well before it reached the end. If Grieco had stuck with his original approach, leaving us uncertain what was real and what was illusion, mixing objective reality, Milena’s role, and her dreams, the payoff would have potentially been greater.

Instead, I was left increasingly hoping that the explanation being offered would end up just another one of Milena’s dreams, from which she was going to wake up and find herself back in the brothel. Despite decent performances from most of the actors – Saud, in particular, does a lot of the dramatic heavy lifting, in both of her roles, and acquits herself well – the execution here falls short of sufficient. It feels as if the ideas here didn’t have enough thought put into them, and the makers were either oblivious to, or chose to ignore, the obvious weaknesses in both their concepts and approach.