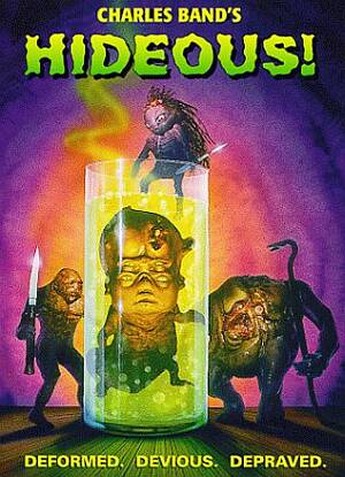 Can I just point out I love my wife? Who else would a) buy a DVD with this title, and b) be happy to spend the second anniversary of our wedding (months, admittedly – may this honeymoon period never end!) watching it? Anyway… Giving your B-movie that title is asking for trouble, but this isn’t so bad. It’s not great, however, despite a promising concept of two competing collectors of medical horrors. They tussle over a mutant found at a sewage-treatment plant, not realising it’s still alive and can control other specimens. Things soon go bad, with the characters locked up in a mansion, and then, out come the freaks…

The potential is never realised; while there are some good lines and characters, it hardly ever achieves the excessive level of outrageousness the concept demands, not least the creepy sexual undertones apparent in the obsessive hobbyists. There are some odd moments of bizarreness, such as Lovell’s robbery, clad only in hot-pants and a gorilla mask (gratuitous, sure – she still deserves kudos for going topless in an obviously chilly landscape), but the effects are unconvincing when not floating menacingly in large bottles.

As a result, the monsters are rarely more than mildly icky, and never present the level of threat required when the film starts riffing off House on Haunted Hill. There’s irony – hopefully, intentional – in the casting of Johnson, who collects mutants after playing one in Total Recall, and most of the actors perform creditably. It’s the script that runs out of steam around the half-way mark, ensuring that a better title would be Mediocre!