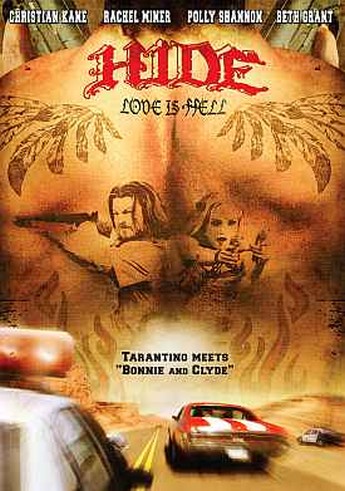 Seven years previously, lovers Billy (Kane) and Betty (Miner) went on a crime spree, that ended with Billy’s arrest and incarceration. Betty went underground, but is now back, to break her other half out as he’s being transported. He is a changed man in many ways, and confesses to having hidden a stash of money before his capture, so the couple head off to the scene of their last stand, a town which is now abandoned by the inhabitants and appears totally deserted. However, is that really the case? When their car mysteriously breaks down, preventing them from leaving, Betty begins to suspect they may not be the only residents. Also, is Billy quite the same person with whom she laughed, loved and slaughtered innocent bystanders, almost a decade previously?

Natural Born Killers is the obvious point of comparison, yet this has a great deal more angst than that. Billy is a tormented soul, who has found God during his time in jail, and as a result finds himself being pulled in two separate directions – with somewhat predictable consequences. The two leads are generally good enough to carry the film, despite there being few other speaking characters – Miner is particularly effective – and Bascombe has enough cool touches to keep up his end of the bargain [I particularly loved an early shot where Betty turns into an angel]. It feels like the script is the movie’s weakest link – the longer things go on, the more incoherent and, frankly, less credible they get; the overuse of the word ‘baby’ becomes pretty tiresome too. Still, the film does have a number of effective moments, and there’s a sense of fire and passion to the entire thing, with Argentina an imaginative and largely undetectable stand-in for the Southern states.