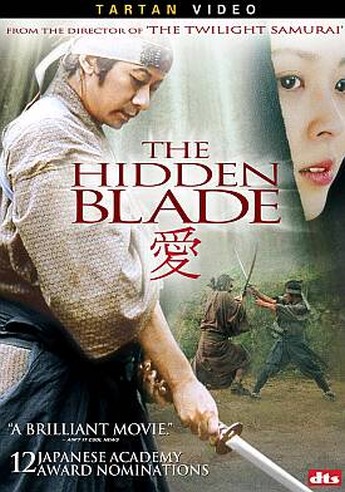 In the 1860’s, the samurai caste was waning in Japan, unable to compete with Western firearms or modernise itself. Katagiri (Nagase) is among this last generation, struggling to live by an archaic code in a world where even his masters have largely abandoned it, and there are, effectively, two story arcs present here. First, he falls in love with a maid, Rie (Matsu) whom he must then rescue from her abusive mother-in-law, though a difference in status makes any relationship apparently impossible. Katagiri is also tasked by his clan lord with killing former friend Hazama (Ozawa), who studied under the same swordmaster, but subsequently rebelled and must be disposed of before he becomes an embarrassment to the clan. Can Katagiri handle his life, and still retain what remains of his – and his family’s – honour?

He’s undeniably a great hero: fearless and outspoken, willing to put his life on his line and speak out against injustice wherever he finds it, regardless of the consequences. As a result, you root fiercely for him in his struggles, whether against the hierarchy, trying to learn strange modern ways of warfare, or simply doing the right thing. It’s also a fascinatingly contrary samurai film, with only one real swordfight. Katagiri says he’s never actually used his weapon, but it’s clear from those round him, that the mere samurai concept still holds power. There’s also a nice orchestral score by synthesizer icon Isao Tomita, though some reports suggest the film largely retreads Yamada’s earlier The Twilight Samurai (which I haven’t seen). I did find Katagiri’s relationship to Hazama pretty thin: they part in the opening scene and don’t meet again for almost two hours, so there’s little sense of history or a bond. Otherwise, though, we found this worthwhile and thoroughly engaging.