I’m quite deliberately leaving this as “uncategorized,” in terms of genre. Is is a drama? A thriller? Comedy? Horror? All of the above, and yet, none of them. It’s now getting on for thirty years since it came out: Winona is now playing a Mom on Netflix’s Stranger Things. While often imitated (most obviously by Mean Girls), it has never been matched, and probably never will be, in our post-Columbine world. Even at the time of making, it was problematic: Heather Graham was initially offered Winona Ryder’s role as Veronica Sawyer, but her parents turned it down because they felt it was Satanic. Even Ryder’s then-agent literally got on her knees and begged her not to take the part, stating it would destroy her career [it was apparently responsible for getting Winona fired from a movie immediately after, so her agent wasn’t entirely wrong] 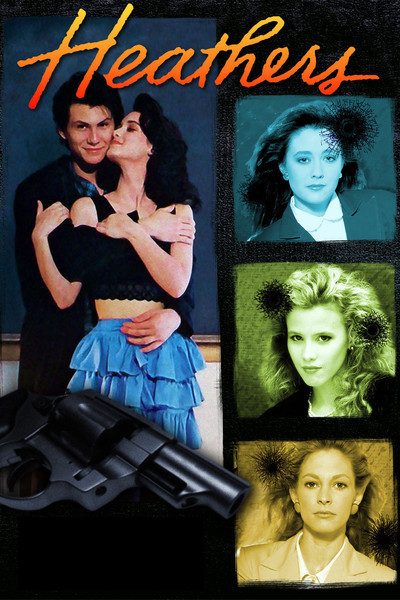 It’s one of those cases of synergy which pretty much no-one involved with the movie has been able to match since. It was Lehmann’s feature debut: two films later, he was getting the Golden Raspberry for Hudson Hawk and his last movie, 2007’s Flakes, grossed a whopping $778 at American cinemas. Writer Daniel Waters did a little better at least for a bit, being involved with Batman Returns and Demolition Man – he also wrote an unmade script for Catwoman, which is considerably better than the real thing. But since Demolition? Oh, dear. Let’s leave it at that. And I trust I need not construct the waterpark slide which represent the careers and personal lives of Ryder and Slater, though both appear to be making televisual comebacks of late.

At least they’re still alive: Kim Walker, who plays Heather Chandler and delivers one of the film’s trademark lines, “Did you have a brain tumor for breakfast?”, died in 2001. From a brain tumor. Then there’s Jeremy Applegate, whose character runs Westerburg High’s “Feed the World” campaign, and at Chandler’s funeral prays, “Please don’t let this ever happen to me. I don’t think I can handle suicide”? He shot himself in 2000. If Winona Ryder is found impaled on a chainsaw, maybe it’s time to start talking about the curse of Heathers rather than Poltergeist.

Regardless of future struggles and fatalities, Heathers knocks every aspect out of the park, to the point where it likely surpasses Waters’ original vision, of a three-hour epic directed by Stanley Kubrick. The opening scene in the cafeteria is utterly brilliant, deftly drawing the characters and their relationships in a couple of moments. That climaxes in JD pulling a gun and shooting blanks at the two jocks that are harassing him, one of the few aspects that date the film. Not so much for that, more Heather McNamara’s reaction: “They won’t expel him, they’ll just suspend his ass for a week or so.” The days when discharging a firearm at school would be seen as a prank, rather than a terrorist act, are no more.

It has lasted better than most “teen” films, in part because of Waters’ ear for surreal language, which largely sits outside the teenspeak of its era, and so doesn’t pin the film down to a particular era. That doesn’t make it necessarily easy to comprehend. Watching the film on its original release in Britain, there were aspects which were completely alien to me. What the hell is a “kegger”? Who is this “Beaver” of whom Veronica speaks? And tater tots? Oh, you mean oven crunchies. 15 years of living in America later, I think I’ve just about got a handle on these elements. But it was only on rewatching it for this piece that I realized the film’s ironic, post-Hinderberg “Oh, the humanity,” was the source for my ongoing use of the line. 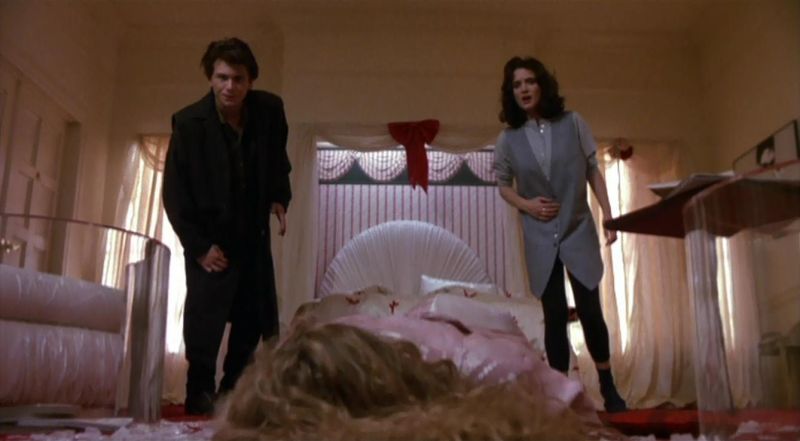 The other particularly outstanding aspect is the look of the film, due to production designer Jon Hutman and cinematographer Francis Kenny. Despite a tiny budget, even for the time, of just three million dollars, it looks better than 99% of films. I’d rank the overhead shot where Chandler crashes through the glass-topped coffee table, as among the greatest I’ve seen. It’s a jaw-dropping shock, in part because there’s no foreshadowing; it’s the first time we’re aware there’s even a coffee-table in the room. I’d also highlight the dream sequence of Heather Duke’s funeral, which begins as if taking place in objective reality, then gradually morphs into full-blown, grotesque surrealness.

The other aspect which stands out for me now is Slater’s performance as JD. It was commonly criticized for being too like a young Jack Nicholson, yet if we’ve learned anything in the quarter-century since, it’s that this is largely who Slater is. He definitely ramps it up though; he apparently tried to call up Nicholson and tell him about it. It brings this thought to mind: is JD the devil? It didn’t come long after Nicholson played Satan in The Witches of Eastwick, and it’s interesting how little JD interacts with other people in the film. Outside of the two jocks, there are very few scenes where he isn’t acting one-on-one, and it wouldn’t take much editing to turn this into Fight Club, where JD is just a figment of Veronica’s deranged imagination.

A couple of other sequence hint toward this interpretation. There’s the scene where he’s observing her double-date with Kurt and Ram, all back-lit and blowing smoke from his nostrils like some demented demon. Then there’s her other escapade at the Remington college party, lit by Kenny with a lurid red glow, to look like a Dante-esque version of the hell which will be Veronica’s future. Finally, JD says (emphasis added), “Your society nods its head at any horror the American teenager can think to bring upon itself,” implying he’s not of that group. It’s an imperfect analysis to be sure, yet I like the concept of Satan roaming the country, goading impressionable teens into malicious actions. 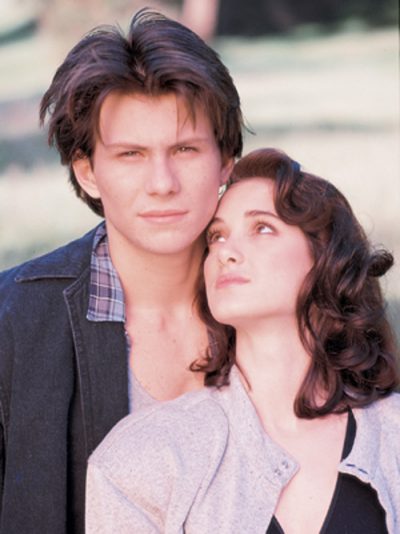 Which brings us to Columbine. It was The Matrix (and KMFDM!) which came in for most of the misplaced blame after that attack. But it wouldn’t be a stretch to consider JD an inspiration, both in style (trenchcoats) and action; in 1999, Eric Harris and Dylan Klebold planned to blow up their entire school. Yes, it’s perfectly clear that JD is a psychopath, and the film-makers’ intent is to illustrate the stupidity and sheer pointlessness of the murders committed by him and Veronica. As she says, “I cut off Heather Chandler’s head, and Heather Duke’s head has sprung right back in its place.” It’s the war on terror, or drugs, or whatever, in a high-school setting. However, JD is still portrayed as “cool”; necessarily so, since we need to understand Veronica’s attraction to him. Misinterpreting this is not incomprehensible.

There’s so much here to appreciate, I could probably drone on for another thousand words on various aspects.  The unfilmed endings, including where the school blows up and ends with a prom in heaven. Thomas Newman’s score. Shannen Doherty, who brought what has been described as a “brutal professionalism” to the set. The DVD trivia track also states that everyone on the set seemed to enjoy the scene where Winona Ryder slapped her… How the makers wanted to use Catcher in the Rye as the book which runs through the film, and were unable to get permission. [7-11 and Perrier also balked, though Swatch ponied up for their product placement] Watch the film with that in mind, and it brings a different resonance, especially if you know it was the book carried by Mark David Chapman when he shot John Lennon.

It wasn’t a hit at the time. According to Waters, “I made more money writing a treatment for Parent Trap 3 for the Disney Channel that never happened.” However, those who loved it, did so with a vengeance; it eventually found its niche, and is now an undeniable member in the cult film Hall of Fame. It transcends the generations: even our daughter, who was barely born when the movie came out, adores it. But I’ll finish with a tribute to the unknown actress, referred in the shooting script only as “Squeeling Girl #1”. If you are only going to have one line in a movie, you might as well make it a doozy. Delivered with a breathless, almost giddy abandon, it’s one which sums up the twisted black essence of Heathers as well as any other in its brilliant script.

Did you hear? School’s cancelled today because Kurt and Ram killed themselves in a repressed homosexual suicide pact.