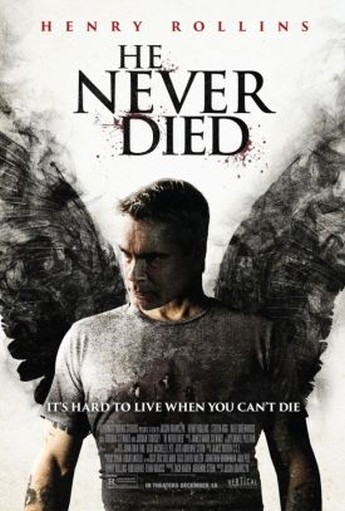 We would watch Henry Rollins in anything, and Jack, the taciturn thug with very few friends we see here is perfect for letting Rollins tap into his inner psychopath – he takes no shit, and doesn’t give one either. Yet, there’s more to him, as is (very) slowly revealed over the course of this movie. Mysterious scars on the back. His odd meetings with an “intern” (Stewart), who provides him with brown-paper wrapped packages. A fondness for bingo. His trunk stuffed with cash, even as he lives in a rundown one-room apartment. Jack’s ability to withstand pain and heal from injury. And finally, the gang who are apparently on his tail, and will target anyone – his intern, or even the daughter (Todosey) Jack didn’t know he had, until she shows up on his doorstep – to get to him. It’s up to our hero, and w very reluctant diner waitress (Greenhouse), to save the day.

You can probably work out where this is going before the film bothers to tell you, though the film doesn’t rely too heavily on this as any kind of twist: indeed, Jack’s explanation is so low-key as almost to be underwhelming. It does likely take too long to get there, and by the time you reach the end, you will likely have more questions than answers, e.g. who is the man with the goatee who keeps popping up? Word is, the makers are looking to follow this up with some kind of mini-series, and that might be a more appropriate format, though if the script for that remains as obtuse and vague as here, it’s going to be highly irritating. The film’s strength here is Rollins, and the director knows it: watching him react to, and interact with, the world at large, is easily the greatest pleasure the film has to offer, and is no small delight. That said, if you feel you need more from your cinema than a surly, aggressive man stomping around, against a vaguely-Biblical backdrop, I couldn’t argue with that.