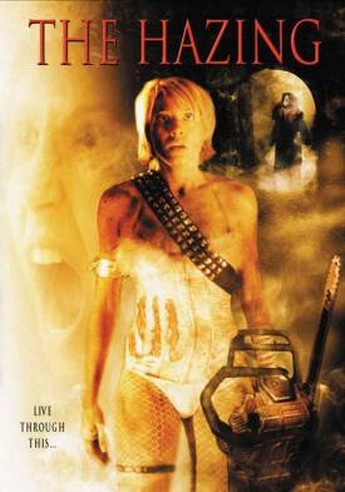 This film takes me back 15 years or so, to the callow days of youth – we’d loot the local video shop for anything with a cool cover, then load up on beer and crisps for an all-nighter. The Hazing would have fitted right in, between Hollywood Chainsaw Hookers and The Toxic Avenger. As part of a fraternity/sorority initiation, five students are sent on a scavenger hunt, then to a haunted house. However, one of the items they must find is a book of spells; they ‘accidentally’ kill the owner (Dourif) in the process, and his vengeful spirit follows them to the house for revenge, possession and the removal of tops (Shepis and Rose, needless to say).

You’re aiming high when you specifically mention The Evil Dead, then work a photo of Bruce Campbell into your movie, and The Hazing doesn’t quite get there. However, few films do – this is still more than acceptable, thanks not least to a nicely-sarcastic attitude. When the response to, “The book is evil!” is “And it will be punished – we’ll all take turns spanking it later,” you have reached levels of wit far beyond the usual ‘spam in a house’ flick. There are other surprises, too: we’ve seen so many entries in this genre, we can usually predict accurately the fate of all involved inside ten minutes, yet must confess, we called a couple wrong here. 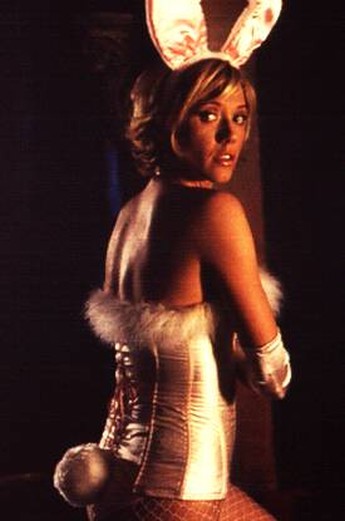 Sure, they remain stereotypes with a puddle’s depth, but any development is largely a waste of time when character arcs mostly end in gruesome death. This doesn’t stop Kanefsky from occasionally trying, however, with scenes revolving round “sensitive male” Tim (Shen). Luckily, they don’t last long, and we’re soon back to the meat and potatoes. The FX highlight is probably the sequence where a guy rips his own tongue out, then attacks it with a chainsaw when it refuses to stop pleasuring Delia (Nectar Rose, right). It’s a shame, if only a minor one, that this fabulous level of perverse imagination is never quite repeated.

Everything gallops along at a good pace, with little slack; Shepis does best as Marsha, who possesses that rare genre quality, intelligence. The story generally is put together without obvious holes, even if I can’t use the word “credible” when discussing any plot involving a portal to another dimension. Being honest, we had low expectations – I’m happy to report The Hazing easily surpassed them. In a field notorious for disappointment, this was a very pleasant surprise.