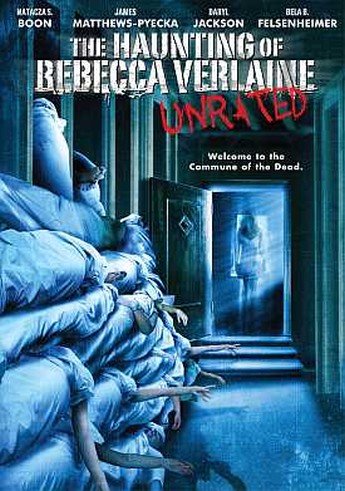 This starts with some eye-popping gore, depicting a massacre at a hippy farmhouse which resulted in a double-figure body-count; the only survivor is Rebecca (Boon), who suffers traumatic amnesia and can’t remember a thing. She gets adopted by her aunt and uncle, who fabricate a car-accident instead, to explain both her lack of parents and memories. A decade later however, she starts to have visions, with the dead apparently returning to life, in order to present infomercials for kitchen utensils on her television…no, really! Together with her boyfriend, David (Jackson), a college psychology lecturer, she returns to the scene of the crime, where local detective Munster (Matthews-Pyecha) is still puzzling over the massacre. The spirits of the victims are still in the farmhouse, however, and will not leave Rebecca in peace until she brings them those responsible for their deaths – and hers were the only fingerprints found on the murder weapons.

Can’t argue with the splatter here; a SWAT raid on the farmhouse leads to some spectacularly icky mess, reminiscent of Peter Jackson’s early work [it may not be coincidence that the original title of this, Garden of Love, was a song in Jackson’s puppet epic, Meet the Feebles]. Ittenbach knows what to do with latex body parts and Karo syrup, both of which are used in abundance here. With actors and the script, however, he is on much less comfortable ground, Boon is okay, but most of the supporting cast appear to be recent graduates from English as a Foreign Language, and the resulting ignorance of idiom infects their performance to an unfortunate degree. Ittenbach uses some nice visual tricks to get over Rebecca’s visions, but the pacing is too uneven for this to work, with two large gobbets of impressive slaughter, separated by some very talky chunks. Memo to Ittenbach: if you’re going to try and make your German-shot film look like it is set in Britain, do try and get some cars with right-hand drive. Thank you for your attention.