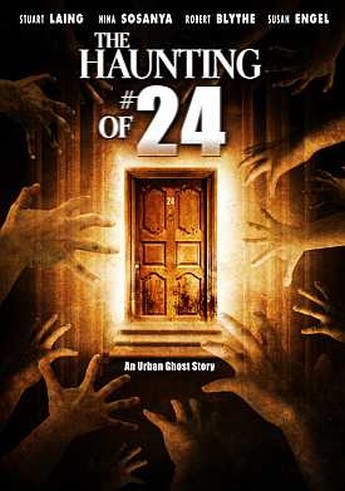 For a brief moment, I hoped this was going to involve Jack Bauer running around, shouting “Where’s the poltergeist?” at people. No such luck. Instead, it’s about John (Laing), a young man who moves into an apartment building, under landlord Mr. Stone (Blythe). It’s clear early on that Laing is escaping from something – but what, exactly, has he escaped into? Someone keeps trying to get into his room in the middle of the night; notes are shoved under his door recommending, in the strongest possible terms, that he leave; and the old woman down the hall (Blythe) seems to have her own dark secret. Of course, rather than paying attention to the ominous goings-on, and rather than running, screaming and checking into a Holiday Inn for a couple of days, John opts to hang around: it’s what people do in haunted-house flicks.

The timing and change of name are obviously intended to cash in on the DVD release of 1408, and it is a similar style of horror film, relying more on atmospherics and suggestion than in-your-face gore. The problem is, Laing is no John Cusack. Frankly, he isn’t even Joan Cusack, and since the bulk of the film falls on his shoulders to carry – the character is in almost every scene – it’s a near-terminal problem as far as retaining audience interest is concerned. While Blythe and the rest of the supporting cast are solid enough, and writer-director Hogan has some potential, they aren’t enough to cover the big, gaping, dull hole which is the central performance. Long before the end, you’ll be wishing for Kiefer Sutherland to kick down the door and come to the rescue.