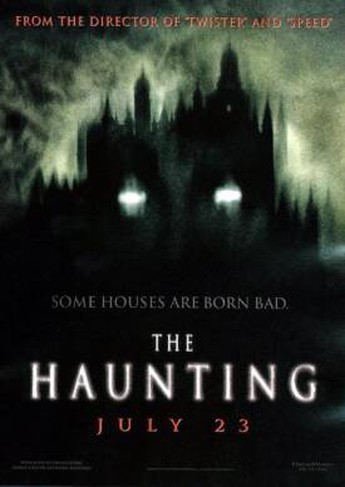 I remember when I was 6 years old and I had to stay home with the measles. On television at that time there was a channel that played the same movie all day long. On that day, I saw The Haunting (1963) over and over and it scared the living shit out of me. It was classic horror, playing with your head the whole time, making you think there were monsters and blood and guts, even though there wasn’t a trace of it in the film. But that made it great – the fact that you were sure there was. And it stays with you.

The Haunting (1999) is a remake of that movie I saw when I was 6 and, even with the incredible special effects and the unbelievable sets, it was scripted and filmed in that same classic horror tradition. I literally jumped out of my seat on two occasions and found myself back to the old habit of biting my nails. The special effects made it even bigger and better, because they didn’t interfere with the fright that began to crawl up your spine as soon as you entered this huge house. It seemed alive…no, not seemed – was alive. You could hear it breathing throughout the entire movie.

Neeson plays a fear therapy specialist, running an experiment on a group of unknowing participants, who believe they are being treated for their individual problems. Zeta-Jones, a bisexual, nympho, dominatrix insomniac (sit down, Jim!), had Owen Wilson crazy for her, yet they constantly sparred for dominance. Taylor (memorable in The Addiction and Mrs. Parker and the Vicious Circle) was great in the starring role, never really sure if she was experiencing parapsychic or just psychotic episodes. The story, originally penned by Shirley Jackson back in the 60’s, is one that takes your inner fears and brings them out. I enjoyed this new version immensely and recommend it to all who appreciate the tingle in your spine as you sit around in a circle in a dark room telling ghost stories. It takes you right there.