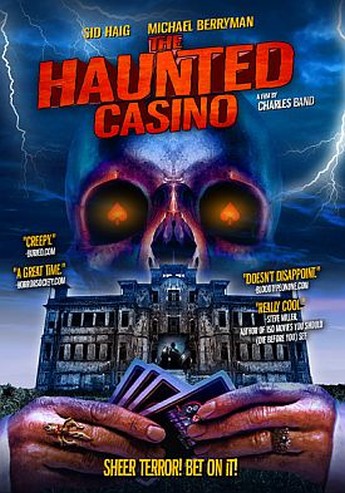 This is a retitling of Dead Man’s Hand: Casino of the Damned, which came out in 2007. Matthew (White) inherits an abandoned casino from an uncle he never really knew, and decides to go check it out with a few of his friends. Turns out to their surprise – if not the audience’s – that the place is inhabited by the ghosts of some mobsters, in whose deaths said uncle was involved. They’re out for revenge, on pretty much anyone who crosses the portal, forcing them to play blackjack or roulette, with their lives as a stake. Needless to say, they’re particularly pleased to see a relative of the man they blame for their deaths, and hope he can also shed light on the millions of dollars in silver that the uncle supposedly squirreled away somewhere.

Man, this is dull. Uninteresting characters, memorable in no way due either to scripting or performance, spend the first hour meandering around, without anything of significance happening. What sticks in our mind most is how the characters and the casino are never seen in the same shot: we see the actors supposed looking at the casino, then a picture of the casino, then back to the actors. It’s painfully obvious there was no external set built or location used. Haig, along with another horror icon, Michael Berryman, are decent enough value – and certainly, the former shows up the young actors to an embarrassing degree. However, the fates dealt out are second-rate in both concept and execution. For instance. some of the make-up turns the roulette croupier’s head into what was presumably aiming at a roulette wheel, but ends up looking more like another Full Moon creation, The Gingerdead Man. If you can’t think of any amusing ways to kill people in a casino, then…well, you were obviously working on this film.