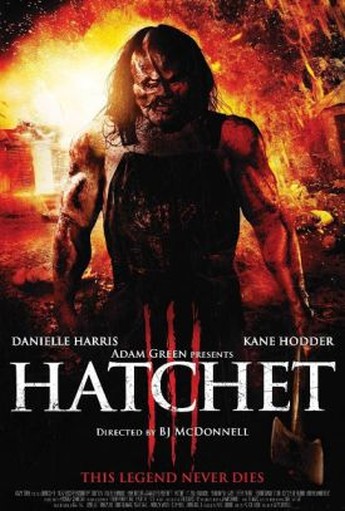 Interestingly, the man who directed the first two parts, Adam Green “declined” to do so here, handing the reins over to McDonnell, who had worked on the earlier entries. Hard to tell, to be honest: it’s not as if this exercise in gleeful splatter exactly has an auteur’s stamp on it. Victor Crowley (Hodder) was dispatched at the end of part two, but does that stop him? Of course not. The only survivor of that, Marybeth Dunston (Harris, now with her right eyebrow apparently under much better control), rolls into a cop station carrying Crowley’s scalp and a shotgun, with the results you’d expect: she’s locked up. However, her story of a massacre in the swamps not only checks out, it soon becomes apparent the bodies are still piling up. Sheriff Fowler (Galligan) heads out to investigate, and Marybeth learns that Hodder can only be killed in a very specific manner, with the help of a particular item.

After the disappointment which was the second part – and I speak as someone who enjoyed the original – this is something of a return to form. It doesn’t hang around, starting with a recap of the preceding installment which, to be honest, is more entertaining that that whole movie, and then generally keeps moving forward. There is what seems like a lengthy diversion, but it’s worth it because of who Marybeth has to meet, to get the necessary item, and while that’s going on, the film regularly flips back to Crowley, bending, folding and mutlating everyone in his vicinity. It’s not clever, and it’s not subtle, but as a cinematic meat-grinder, this does the job that is asked of it, with an acceptable level of energy and flair. There are also bonuses for horror fans, such as seeing Hodder (the original Jason) go up against a SWAT team leader, played by the actor who was Jason in the recent reboot. I can’t call this anything special, but it’s briskly entertaining, in an aggressively cheerful fashion. Really, what else would you expect from a film with this title?