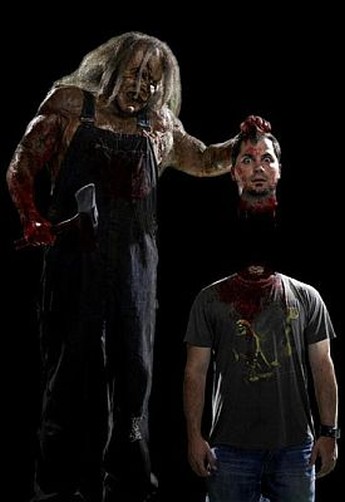 This follows on immediately from the events of the original, albeit with a totally different actross (Harris) playing heroine Marybeth Dunstan, as she escapes from the swamp where Victor Crowley (Hodder) killed her brother and father in the first film. She finds out from the Reverend Zombie (Todd) that her father was one of three kids who were responsible for the fire that disfigured Crowley, and that the vengeful spirit is still haunting the swamp, dispatching anyone foolish enough to enter. Zombie puts together a hunting party of various ne’er-do-wells, along with Marybeth and her uncle (Holland), supposedly to help Marybeth achieve closure, except he has his own interests to take care of, such as opening the swamp back up to his tour business, as well as recovering the not inconsiderable investment of his boat, taken in there for the first movie. No prizes for guessing, it’s not long before Crowley is slicin’ and dicin’ the new arrivals in his territory.

Let’s get this out of the way first. Danielle Harris’s right eyebrow, which appears permanently lifted in a sardonically quizzical expression, as if she had been receiving acting lessons from Roger Moore. Mercifully, in the second-half, they’re sensible enough largely to cover it with her hair, but if you don’t find it immensely distracting early on, you’re better viewers than us. Ok. That out of the way, this was generally disappointing; while the original had its tongue in cheek, and played as much as a satire of slasher movies, this is more or less an example of what its predecessor was parodying.

By this, I mean, the kills are occasionally amusing and inventive, and there’s absolutely nothing between them to keep your interest. There are some moments which are obviously intended as nods to horror fans, e.g. references to Jason Vorhees and a thoroughly pointless Lloyd Kaufman cameo; however, these come over as more self-indulgent than anything. Green made a huge stink after the brief theatrical release was cut short; the chain responsible, claimed disappointing box-office was the reason. Having now seen the film, I tend to believe them, though I can now at least say I have seen someone decapitated with their own intestines. So that’s nice.