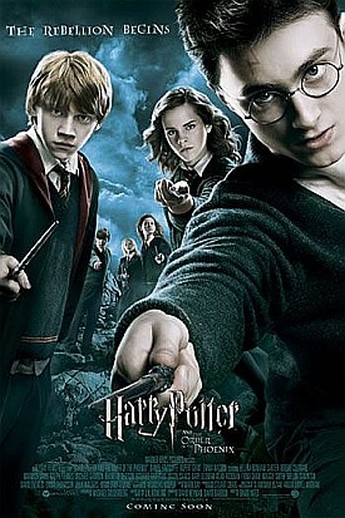 The fourth? Fifth? Whatever! movie based on the series of books continues the darkening in tone, which has become increasingly apparent as the saga progresses. Harry, Dumbledore and their allies find themselves increasingly ostracized for their claim that Voldemort has returned. A new Defense Against the Dark Arts teacher (Staunton – yes…another one!) is at Hogwarts, though she is as much intent on preventing education as promoting it, and it’s up to Harry to fill in the gaps in his schoolmates’ education. However, matters are complicated by an increasingly-close psychic link between our hero and Voldemort, who is massing forces to his side, and is after an artifact that might give him a crucial edge in the looming war. The titular group, along with Harry, must stop him. Yes, plenty going on there, and if you haven’t seen the previous entries, you might be at something of a loss.

You may also miss out on the development of the characters, with Harry gradually turning from an adolescent towards an adult, prepared to take action rather than be simply reactive. Basically: he’s growing up, and the loss of innocence is a major theme, in ways both good – Harry’s first kiss – and bad, as he has to deal with death, in a more personal way than previously. There’s also an odd subtext, almost political yet interesting, with echoes of Stalinist Russia in the ruthless suppression of dissent. The main appeal, however, remains a parade of just about every Great British Thespian, from Gary Oldman to Helena Bonham-Carter, though Alan Rickman steals ever scene he’s in, with such a lack of effort that it’s awe-inspiring. Yates, mostly a director of British TV, adapts nicely to the spectacle, even though some of the CGI work is surprisingly ropey [the giant?]. The climax is among the best of the series though, with a sense of danger, that’s a good appetizer for the battles certainly to come.