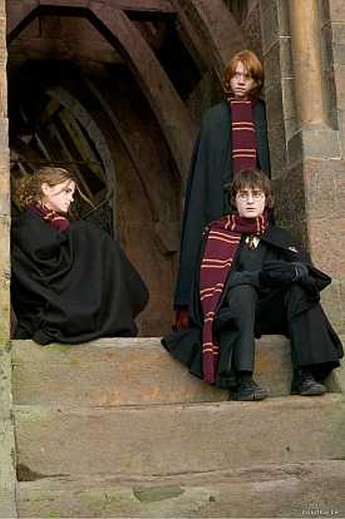 I still haven’t read the books, but suspect this suffers from ‘middle volume’-itis – the climax is more anti-climatic than anything, though we get to see uber-villain Voldemort in full for the first time, after he’s been much discussed [surprisingly much discussed, in fact, for someone called “He-Who-Must-Not-Be-Named”…] It is certainly too long, rambling on for more that two and a half hours, with the Tri-Wizard tournament at the center of proceedings massively mishandled. The most exciting sequence, in which Harry faces a very miffed dragon, is too early, with everything after it paling by comparison. I mean, running through a maze – even an ominous one where the walls close in – seems like a light pastime beside that. [The book, apparently, had a more ominous set of challenges for Harry and the other entrants to face]

However, there’s still a fair bit to enjoy, not least the look of the film, which I loved, with CGI being used to enhance atmosphere not just for needless show. The trio of young characters are maturing, and much of Harry and Ron’s nervousness around the opposite sex brought back memories of my own. And, as ever, a sterling cast of British actors fill in the background, effortlessly stealing just about any scene in which they appear. Gleeson is the new Defense Against the Dark Arts teacher, and is just as strange as the previous incumbents. The overall tone is certainly darker and less ‘cute’, as Voldemort prepares to make his move, and death is really brought into sharp focus for perhaps the first time. Though I must confess both of us dozed off on initial viewing, I enjoyed this more than any film since the series opener, and it restored my interest in seeing how the rest of them unfold.