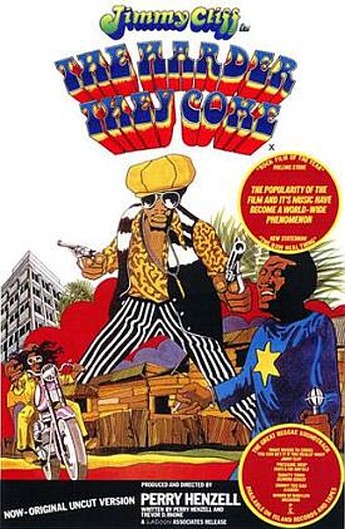 Despite sounding like a porn flick, the first truly Jamaican film – made by locals, for locals – is loosely based on the true story of folk hero/singer, Rhygin. Ivan Martin (Cliff) comes to town as a country innocent, only to have his trusting nature gradually twisted into a brutal cynicism, as everyone screws him over: the priest who takes him in; the record producer who buys his song for $20; even his associates in the ganja business. After he kills a policeman, he finds the fame that has previously eluded him, but it’s giving little away to say that a happy ending for all is not exactly in the cards.

The only movie Henzell ever made, its obvious cheapness and occasional amateurishness don’t work against it too badly; indeed, along with the improvised script and non-professional actors, they may help create the raw, gritty feel which is one of the film’s strengths. As a country’s first feature, it’s remarkably honest, and rather than a tourist board promo, it’s closer to a Jamaican version of Scarface. One can only imagine the incendiary effect this tale of corruption and brutality had on the local population. Add in a totally kickin’ soundtrack, and you’ve got something bordering on the unique – though the most memorable thing of all is perhaps drug-lord Pedro’s amazing hair, which may be the greatest in cinema history.