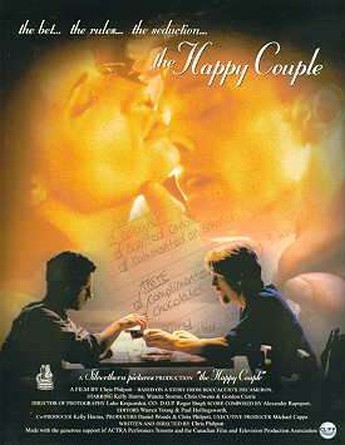 Based on a tale from Boccaccio’s Decameron, a 14th century collection of stories that prove some things never change – in particular, human nature. Dwayne (Owens) is so convinced of his wife’s Dianne’s fidelity, he bets ten grand with Graham (Harms) that she will remain faithful, in the face of any attempt to seduce her. Graham duly sets to work, and he and Dwayne are soon turning their salesmanship skills on each other (it’s not “lying”, it’s “strategic honesty”), while Dianne largely wonders what the hell is going on. She works at a crisis hotline and, gradually, becomes more like one of the callers, but no-one gets out unscathed.

The resulting paranoia, deceit and entanglements are the emotional equivalent of a car crash, especially if you’re rooting for love to come shining through triumphant – fairly early on, it’s clear that’s a forlorn hope. You’re basically watching everyone involved destroy their lives; since they’re not intrinsically bad people, it’s hard to call this an “enjoyable” experience. It’s still easily possible to appreciate, however, since the performances are very good, in particular Harms, who finds inspiration even in his hotel-room Gideon Bible. And if you’re comfortably cynical about humanity, this probably counts as a feel-good flick. The moral seems to be that doubt can destroy anything, and that some things are best left untested. In the world inhabited by this film, there doesn’t appear to be much room for argument on those points. An anti-date movie, if ever there was one.