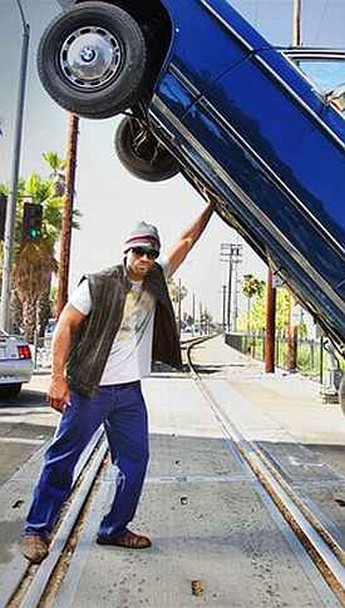 Hancock (Smith) is a superhero. But he’s not a very “good” one: oh, he gets the bad guys, and saves lives, he just causes a lot of collateral damage and doesn’t give a damn what people think of him. He also drinks, heavily, and suffers from amnesia, so has no idea of where he comes from, or why he is immortal and has all these powers. All told, his life is teetering on the edge of disaster, when he saves PR guru Ray Embrey (Bateman) from a train. Ray offers to help Hancock straighten things out; grudgingly, the superhero accepts, though is less than happy when he discovers that to do that, he must go to jail, and stay there until things become so bad on the streets that the police have to call for his release. However, the bank robber he captures (Marsan) holds a grudge against Hancock, and escapes from prison to seek revenge. Conveniently for him, there’s a twist which means that Hancock is no longer quite as invulnerable as he was…

The first half of this works a good a deal better than the second. While the twist, when it shows up, certainly has an impact, I can’t say I was convinced by the direction in which the film goes from that point on. The script was much more successful dealing in a straightforward fashion with the problems faced by an abnormal man trying to live in normal society. That’s an aspect often ignored or brushed aside in many superhero movies, and Berg handles this with a mature touch: while Hancock is an asshole, you can see why, and Smith brings enough charm to the role that you still care for the guy. There’s an intriguing look to the film too: it feels almost like an indie, a lot of it shot hand-held, yet clearly cost an awful lot of money. However, it’s all forotten in the final reel, replaced by the usual banging and shouting, contrived to provide an artificial climax. Something of a shame.