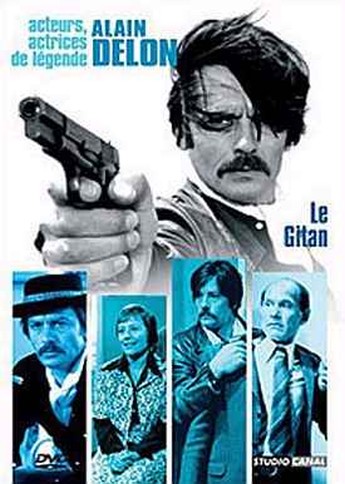 Inspired by our previous good experience with Monsieur Delon, we delved a little further into his back-catalogue, but this 1975 entry proved very disappointing. Here, he plays Hugo Sennart, a gypsy robber who has escaped from jail and gone on a crime rampage that the police seem powerless to stop. His path around France perpetually crosses with that of a safe-cracker (Meurisse) whose wife has just unfortunately fallen off a balcony. However, she had been having an affair with an undercover cop. There’s just too much going on here, with the film never deciding whether it wants to concentrate on Sennart, the police or the safe-cracker, and as a result, none of them are covered in anything like adequate depth.

There are occasionally moments of interest, such as a grandiose, sweeping opening shot, and the first scene, at a gypsy encampment, hints at potential social commentary which never develops significantly. There’s also a cool bit where Sennart goes to confront two gangster brothers, who have betrayed him after the police start squeezing them to try and get to the renegade. But on the whole, this is a badly-written script, which even Delon’s charisma can’t save – matters are definitely not helped either, by some stunningly-poor examples of seventies style, particularly on the hair front. Interest had pretty much evaporated by the time Sennart somehow ties ropes from his motorbike to a gate, in order to open it as he drives through. Magical ropes, which apparently evaporate from both immediately. Sigh. Not the finest product of French cinema this, I’m afraid.