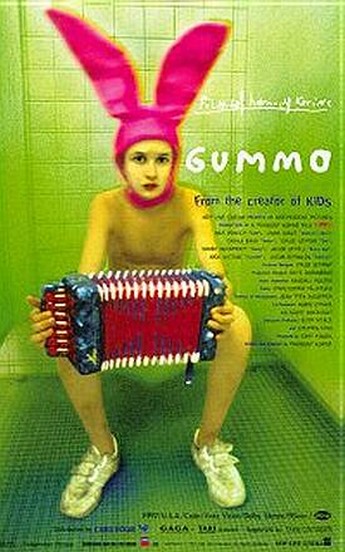 I can’t get a handle on this at all. Quite conceivably, it may be the worst film ever made; or it might be the best (less likely, but not impossible). It seems to depict life in Xenia, Ohio, which appears to be the white-trash capital of the universe, and is full of bizarre images, such as a kid in bunny-ears playing the accordion in a toilet. Some scenes seem right off Jerry Springer and if these people were acting, I’m impressed. Or scared. There’s not really much plot: a pair of teenagers shoot stray cats and rent the services of a retarded prostitute. Some arm-wrestling occurs. Duct-tape is applied to nipples (that’ll be Chloë Sevigny). Two skinheads engage in a mock fight that looks rather more than mock.

It’s strung together without much regard for usual narrative conventions, but is a convincing portrait of the American Dream gone horribly wrong. However, once it’s established that these are people with whom you don’t want to spend any time, the film has little more to say. Put bluntly, knowing that shit happens doesn’t mean you want to swim in it, though we found ourselves strangely unable to turn the movie off. [We note that in the IMDB, easily the two most popular votes were 10/10 and 1/10] There’s references to a tornado which swept through the town – on the evidence presented here, the sooner another comes, and wipes the place off the map, the better.