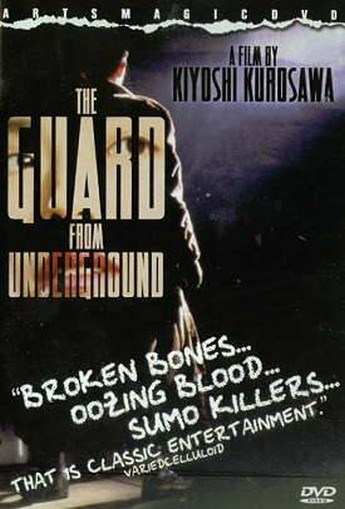 Near the end, the protagonists, trapped in an office building by a psychotic security guard, try to make contact with the outside world by using a “telex”. For those less than 30, this was, according to Wikipedia, “a now largely obsolete electro-mechanical typewriter.” Nowadays, this film would have to deal with cellphones and the Internet – it’s just not as easy to be trapped at the mercy of a lunatic killer as it used to be. Turns out this was made in 1992, but save the technology, you couldn’t tell. An art curator gets a job with a company that has decided to start selling paintings, the same day a mysterious, very large security guard also starts work. Meanwhile the radio has news about the reopening of a brutal murder case involving a sumo wrestler. Could this be connected? Oh, take a wild stab in the dark – which, by coincidence, is the fate of most of the film’s characters too.

Well, close enough: this psycho prefers to break bones, with crunchy enthusiasm. Though to the film’s credit, it pretends nothing else, making no attempt to conceal the killer’s identity. Like the slasher films that are its clear inspiration, this is long on atmosphere; explanation is largely hand-waved away. Look, he’s just a madman, okay? The deserted office setting is a nice one, especially when the film hits the final reel; while the murders are largely bloodless, they’re no less cruel for it. Though I’m not a great fan of the genre, I enjoyed this a lot – particularly appealing was the black humour mixed with the violence. [The workers are incompetent, though as the company’s HR director sleeps all day, this is probably not surprising.] But it’s equally effective as horror, and certainly plays on the nerves – if your boss asks you to stay late, this will likely make you think twice about accepting.