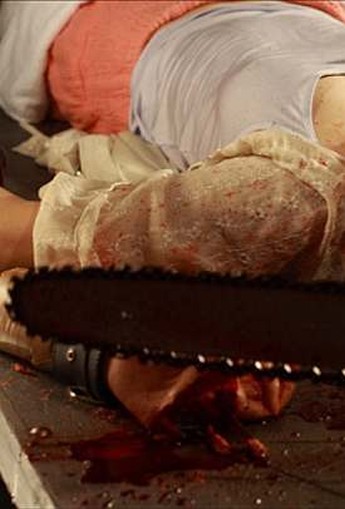 Dear Britain… I thought you’d given up on banning movies. That was one of the reasons I felt I could move to the US, because my job there was done. So imagine my disappointment when I heard that the BBFC had refused, point-blank, to certify this one, saying there was “minimal narrative or character development and presents the audience with little more than an unrelenting and escalating scenario of humiliation, brutality and sadism.” Needless to say, off to eBay I went. Trust the Japanese to raise the bar on “torture porn.” After watching this, then the best efforts of Eli Roth will hardly register a twitch on the meter of that particular genre. It hardly wastes any time on plot or character development. A couple, out on their first date, are knocked out and taken to the lair of a psychopath (Ôsako), who tells them he’ll only let them go if their will to survive is sufficient to sexually excite him.

Yeah, that’s always going to sit well with the BBFC, for whom any link between sex and violence remains taboo. I imagine the lengthy sequence where the psycho masturbates both halves of the couple is probably where the BBFC started to word its press release [“Blah, blah, rejecting a work outright is a serious matter, blah, blah”] From there, it’s an escalating series of atrocities, involving the use of a chainsaw to sever fingers, removal of other bits, eye-gouging, and a brief respite where it looks like he might let the couple go, having been satisfied by their survival urges. Three guesses as to how that works out: the finale, instead is an excruciating sequence, set to – of all things – Land of Hope and Glory. Maybe that’s why the BBFC banned it? Dissing our unofficial National Anthem?

If there’s any kind of theme here, beyond the nastiness, it would be the question of how far one is prepared to go to save a loved one – though that seems to be a one-way street here. I did tell Chris that, yes, I would be prepared to let someone hammer nails into my testicles to save her, but I don’t think I was quite convincing. My whimpering at that scene probably gave me away. It is certainly rather better-made than other entries at the extreme end of the genre, and gains several points for not waving the camera about. Wisely, it runs only 73 minutes, which is about all even I would be likely to stand. I can only wait, with amusement, for someone in Hollywood to think it’s a real snuff movie.