Subsequent events, in the shape of Yelchin’s untimely death, give this an additional frisson. Though the film probably doesn’t need this, given it pits old Star Trek, in the shape of Jean-Luc Picard, against new Trek‘s Pavel Chekhov. Oh, hang on: make that new Star Trek against really new Trek, I guess. It’s certainly a change of pace for Stewart, whose characters over the years have tended to be kindly, when not downright heroic. Playing a hardcore neo-Nazi bastard, as here, takes some getting used to. To be honest, part of me kept expecting this to be a questionable holodeck simulation. 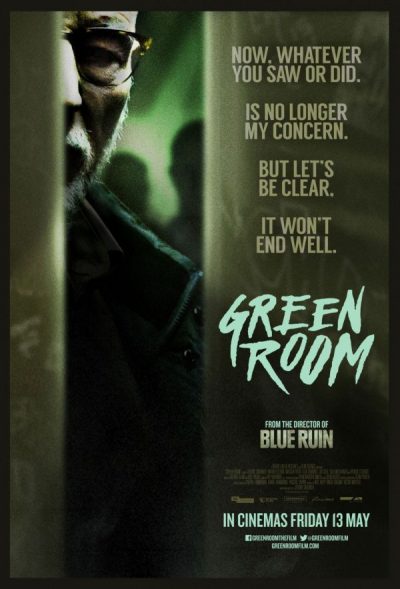 Pat (Yelchin) and his pals form punk band The Ain’t Rights, whose low-rent tour, powered largely by gas syphoned from other vehicles, finally grinds to a halt near Portland. Good news! A lifeline appears, in the form of a last-minute engagement. Bad news! It’s at a white supremacist club in the woods. But, hey: a gig’s a gig, right? No. Not when you pop back after to get your cell-phone and see a couple of Aryan brothers standing over a dead body. The band has suddenly become a loose end – one which club owner Darcy (Stewart) cannot allow to get back in their van and drive away.

I actually enjoyed the set-up enormously, having been (through Chris) tangentially involved with running shows for touring bands at the bottom end of the spectrum. This aspect rings absolutely true, and I laughed like a drain when The Ain’t Rights chose to open their set with a cover of The Dead Kennedy’s classic, Nazi Punks Fuck Off. When your audience are Nazi punks, this is either remarkably brave or incredibly stupid. Probably both, and I was half thinking that would be the choice which got them on Darcy’s kill list. Nothing so subtle though.

The rest of the way is a solid enough siege film, albeit probably nothing you haven’t seen before. The very tight limitation imposed by the script, effectively locking the protagonists in a single room for much of the running time, helps amp up the claustrophobic tension. Yet the neo-Nazis are… Well, I hesitate to use the words “too nice”, and yet… Having recently finished watching Banshee, let’s just say, if its neo-Nazis had been involved here, the movie would have been over by the half-way point, and with a very unhappy ending for the band members. Those skins wouldn’t have faffed around sending one or two folk in, as if paying their minions by the hour. One of the band members turns out to be some kind of MMA guru too, which seemed more than a little convenient.

That said, Stewart’s uber-calm portrayal is likely more chilling due to its restraint. He plans multiple homicide, with the slightly annoyed expression most of us would make, when rescheduling an appointment for air-conditioner maintenance. On the other hand, this disinterest also plays to the detriment of the movie: if the main threat can’t work up any enthusiasm for his cinematic purpose, why should we? It’s an interesting, anti-type casting choice, and is likely the main aspect which makes this worth a look, at least in passing. Yet I couldn’t help wondering: was Henry Rollins unavailable?