The great question about The Great Wall is this: is it a Western film, shamelessly pandering to a Chinese audience, or a Chinese film, shamelessly pandering to an Western audience? Quite possibly, both. It’s certainly a sloppy mess, that hardly feels like the work of renowned director Zhang, who has been nominated for three Best Foreign Film Oscars, and won awards at Berlin, Venice and Cannes. It’s more like the work of an enthusiastic 11-year-old with an unusually generous uncle. That’s not necessarily a bad thing: I found Raise the Red Lantern such pure, concentrated arthouse, it was more effective than Temazepam, and should only be available by prescription.  This is not likely to send anyone to sleep. The overwhelming lunacy of it all will ensure that. 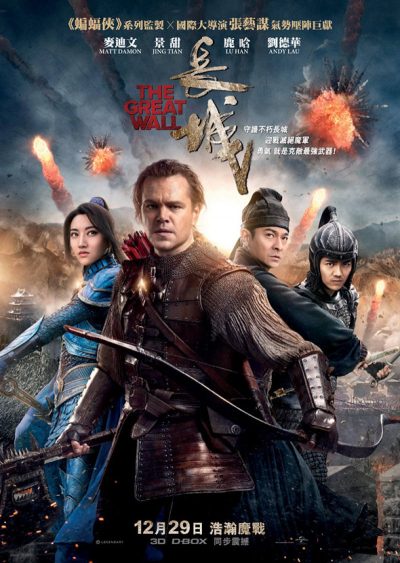 William Garin (Damon) is part of a mercenary group infiltrating 11th-century China, in search of the legendary “black powder”, when they stumble across the Great Wall. Given they’re being hotly pursued, they opt to surrender to the residents, only to find themselves part of a relentless battle against waves of demonic creatures. These turn out to be aliens, spawned from a meteor, which swarm to the attack every sixty years. Fortunately, Garin has stumbled across the monsters’ fatal flaw: they’re magnetic. No, really: magnetic fields make them docile. However, the creatures have figured out they can burrow beneath the wall, and are on their way to the capital. Time to send up the hot-air balloons!

Yeah. Like I said: an enthusiastic 11-year-old. One whose favorite film is the TV broadcast version of Starship Troopers, and was given an age-appropriate book on Chinese history and a trip to Cirque du Soleil for Christmas. Have to say, the first attack on the wall is startling in scope and content; the problem is, Zhang throws absolutely everything he came up with at you. A better movie would have held variants of the monsters back for later use, creating a sense of escalation. Instead, the film empties its armory inside the first 30 minutes, and the rest is simply remixes thereof. Garin’s sidekick (Pascal) is largely discarded, and Dafoe’s character is there, simply as an excuse why the main Chinese character, Commander Lin (Jing), can speak English.

The film is populated almost entirely by what might be called, “Wait, what?” concepts: things that look incredibly cool, yet make absolutely no fucking sense. For example: One of the preferred defensive techniques involves the Crane Troop, shown top. These are blue-armored female warriors who plummet off the wall on chains, stab at the monsters with spears while dangling upside down, before kinda bungee-cording, kinda being winched back up. I’d love to have been in the planning meeting which gave the thumbs-up to that method of combat. Or what are effectively giant scissors, embedded in the wall. The same could be applied to the lead character’s presence, though as usual, claims about whitewashing seem horrendously overblown. Because if there’s a “savior” of the Chinese people here, it’s magnets, not Matt Damon.