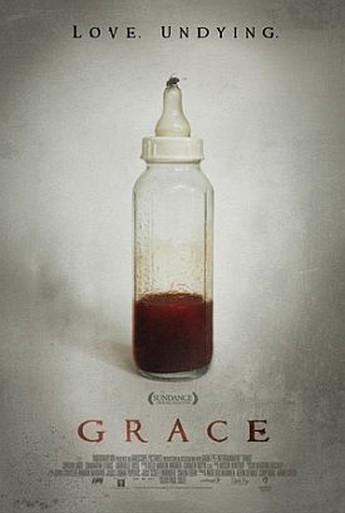 The most memorable moment here is perhaps at the very end of the credits, when the dedication comes up: “For Mom.” I am curious whether the mother of writer-director Solet has ever seen this film, and if so, what she thought. For I don’t think I have ever seen a more gynophobic movie, almost every aspect of the feminine – pregnancy, childbirth, breasts – being portrayed with a morbid terror that reminded me of the early works of David Cronenberg [The Brood in particular]. Madeline (Ladd) has finally got pregnant, after years of trying, but her happiness is dashed when a car-crash kills her husband and unborn child. Madeline carries the baby to term anyway; while initially appearing still-born, it miraculously revives, to her joy.

However, when she brings her daughter, Grace, home, she realizes something is up. Grace smells funny and is starting to attract flies. Her mother-in-law (Rose) is unimpressed by Madeline’s parental techniques and prepares to take control of her grand-daughter. Needless to say, Grace’s blood mother [and I mean that in more than one way], won’t see that happen without a fight. I have to say, I am probably not the one who would be most affected by the targets in this film – while there are some threats which are common to men and women e.g. death, this one is focused on the parents, and particularly the mothers, of very young children.

Not that the rest of us won’t find ourselves squirming it our seats at certain moments – or wanting to yell at the screen, as Madeline proceeds with her parenting, oblivious (willfully or otherwise) to the horrible reality. It’s never made entirely clear exactly what is up with the baby, but it’s just not good. The film’s main issue is a climax between Mom and Grandmom, which proceeds at a pace best described as glacial, and given this, also goes on for far too long. As a result, there’s no tension generated, though admittedly, Solet doesn’t seem to be gunning for this much in the rest of the film – it’s no coincidence Madeline’s cat is named Jonesy, a homage to Ripley’s feline in Alien. It’s a good job we weren’t planning to have any more kids, because this flick would do an excellent job of convincing me otherwise.