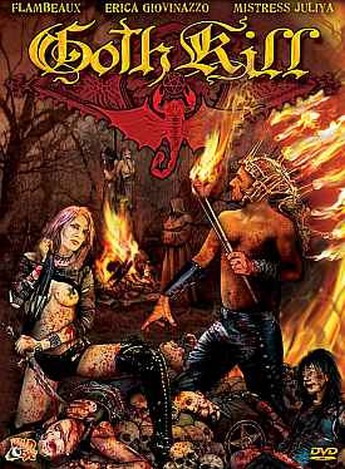 I’m really not quite sure what to make of this at all: it describes itself as a ‘horror comedy’, yet the storyline is not exactly a laugh-fest. The central character is Nicholas Dread (“Flambeaux” – I guess because “Overactor” was already taken), a former inquisitor of witches, who discovered the truth behind the persecution was more mercenary than religious and, to cut a long story short, ended up cutting a deal with the Devil. Give Satan 100,000 souls and Dread would get his own kingdom in hell. After his execution in New York, he ends up resurrected as part of a ritual at a Goth club, and finds himself in the body of Annie (Giovinazzo), the sacrificial victim, from where he commences slashing his way through the attendees. Yeah, I’m sure it’s obvious from that synopsis, how hilarity ensues. And, yet…

Despite my snarky comment above about Flambeaux, he’s actually quite entertaining to watch, sinking his teeth into the lurid dialogue with gusto, and there’s a sense that the film is not taking itself seriously [we paused in the middle to track down some episodes of SNL skit, Goth Talk – it’s almost that level of parody, when it comes to its portrayal of the subculture]. This is fortunate, since it would be almost impossible to take this seriously, and some elements, such as the sound mix, are particularly amateur. It would probably be a great deal more amusing if I knew the people concerned, and that adds to the sense of this being somewhat self-indulgent, put together by a group of people who know each other for their own amusement, as much as anything else. From an outsider’s viewpoint, neither the horror nor the comedy works quite as well as the creators seem to think, yet it has just enough moments where the aims are achieved, to mean it doesn’t outstay its welcome.