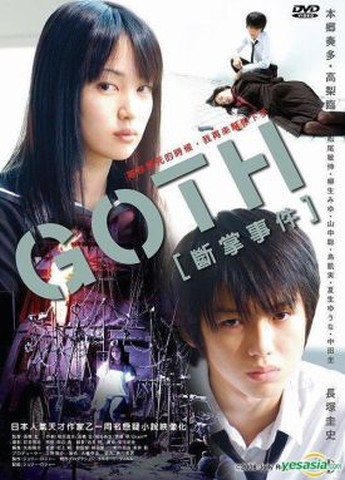 Kamiyama (Hongo) is popular at his school and socializes well with others. Morino (Takanashi) is an outsider who barely says two words to anyone. However, they are both “Goth”, in a deep interest in the darker side of life, and bond over their mutual interests in things such as H.P. Lovecraft and death scene photos. Meanwhile, someone is kidnapping young women, removing their right hands, and then returning their corpses, leaving them in carefully-posed public tableaux. The artistry involved appeals to our dark pair, all the more so when they stumble across what appears to be the killer’s journal, dropped on the floor of their favourite cafe.

Rather than it being just a work of fan fiction, its authenticity is proven when it leads them to an as-yet undiscovered victim, in an armchair half-way up the side of the mountain. However, they still opt not to hand over the diary to the police, feeling more of a connection to the killer. Morino changes her appearance, so as to appeal to the psycho and then vanishes; meanwhile, Kamiyama has a feeling he knows who the perpetrator is…

The concept is more entertaining than the execution: the concept of a pair of teenage Goth detectives is an appealing one, but it unfolds here at the pace of well-chilled treacle. I mean, I wasn’t expecting them to canter around energetically – they are Goths after all. But especially after his girlfriend has been kidnapped by a serial killer, even one with artistic tendencies, I’d expect Kamiyama to show a bit more get-up-and-go. Instead, like the rest of the film, the climax plays out almost more as a series of static frames, and it makes sense that the novel on which the movie is based, was first adapted into manga form.

That said, I loved the look of it, which fits the languid approach impeccably; there’s one particularly mesmerising scene where Morino lies down in a stream, where one victim was placed, and her colors start to bleed into the water. No idea what it means, but it looks amazing. Despite sloth-like tendencies, it’s still an interesting glimpse into a society that apparently lives by the proverb, “The nail that sticks out is hammered down,” and even outcast Morino wears her school uniform. Rebellion is a matter of degree.