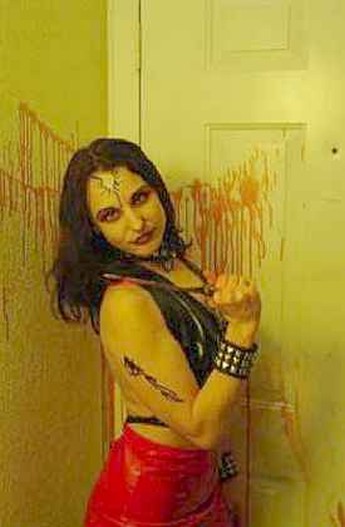 Krissy (Reilly) and Boone (Stann) are just your average Goth couple: it’s all mesh vests, black lipstick and light bondage to them. However, at a club they meet the real Goth deal (Dollar): as in, Goth is her name, and she has it tattooed on her chest. Now, that’s truly gother-than-thou… She takes our little ‘wannabe’ couple under her wing, gives them a couple of snorts of a drug called White Light, and they’re off in the back of her van for a night of murder, mayhem and self-discovery. Because Goth’s idea of fun is pretty twisted, to say the least, and is centered around her three rules: embrace the darkness, live for death and…and… Don’t feed them after midnight. Though I’m not 100% certain about that last one. Krissy is intrigued by their new friend; Boone, a great deal less so, but stays out of devotion to his girlfriend. And, it becomes clear, Krissy may have her own agenda.

Opinion was sharply divided in TC Towers on this one. Chris hated it with a passion, feeling it was contrived, and that Goth could and should have been knocked out, tied up and left in a ditch. I wasn’t so irritated by that conceit: I felt Dollar put over enough force of character to make the scenario plausible, especially when added to the uncertain effects of the drug. The low-budget (or “ultra-cheap,” if you prefer) nature of the production is occasionally painfully obvious, as when a knife whose tip is being used to carve into someone’s chest, is dripping ‘blood’ from somewhere up near the hilt. However, this sometimes works for the film, as in a sequence where Goth storms into a massage parlor, and forces Boone to have very public sex with a dumpy hooker. There’s a grindhouse sensibility to that scene which makes it disturbingly effective: more so than the rest of the film, probably because Reilly and Stann don’t have anything like the same presence as Dollar.

Matters eventually come to a head at the least-unconvincing party ever – population about six, plus a stripper. There Krissy gets mistaken for part of the entertainment, fully awakening her own dark side, which has been Goth’s intention all along. I’m pretty sure members of the goth subculture will not be over-impressed by the pretty shallow and stereotypical view of their lifestyle shown here: still, what are they gonna do about it, write bad poetry on their Facebook wall? While if it wasn’t for Dollar, I’d likely agree with Chris, she helps create an ‘anything can happen’ vibe and as a result, the film does occasionally succeed in being the out-of-control roller-coaster ride to the dark side of human nature, which it wants to be.