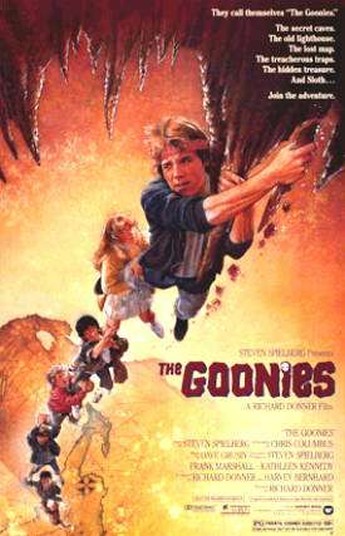 Mikey (future hobbit Astin) and friends stumble across a pirate’s treasure map – and, hey, wouldn’t you know it, all their parents are about to be unceremoniously evicted from their homes the next day. The map leads them to the hideout of the dangerous Fratelli gang, and when they get wind of the treasure below, they hunt the kids through underground passages, past tricks and traps, to an inexplicably well-lit underground cavern and the lair of the questionably-named One-Eyed Willie. Those who have suspicions about producer Steven Spielberg will take note of that name, no doubt.

The Omen‘s director would seem an odd choice for a kiddie adventure and, particularly in a meandering first half, the effect is irritating, not endearing, with dialogue that seems to end every sentence in an exclamation mark. It’s far too highly-caffeinated for me; perhaps if I’d first seen this at age 11, my opinion might be warmer. Though I suspect even then I’d have been unimpressed by characterization which goes no deeper than ‘Fat Kid’ – and that one, Chunk (Jeff Cohen), is actually the most appealing of the bunch. Things improve when it gets some focus during the subterranean chase, but there’s a subplot involving a deformed creature befriended by Chunk: hard to say which is worse, the astonishingly ill-conceived concept, or execution which looks like a Toxic Avenger reject. How this has acquired a Rocky Horror-like cult escapes me entirely – I blame rampant nostalgia…