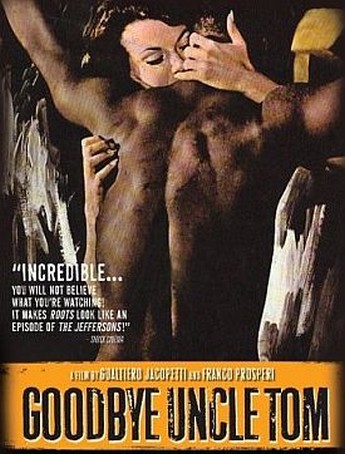 Bloody hell. This is a berserk, vitriolic polemic from those wonderful people who brought you Mondo Cane, and other classic of 60’s exploito-cinema. It’s their counterblast to bleats of “racism” about their earlier movies, particularly from America: they responded with this pseudo-documentary depicting America’s racist heritage. It’s style is weird: the film-makers themselves are shot back in time to capture the treatment of slaves with historical precision (it’s not often a movie gives page references!).

And there’s something to offend everyone here: whites are depicted as arrogant, sneering scum, while the blacks act like the animals they’re supposed to be. There’s a lot of stuff here that’s very hard to watch: the seduction of the film-makers by a teenage black girl probably topped my list, for sheer squirm-inducing voyeurism. The end brings us right up to date with sledgehammer morality; racism is still rife in America, they tell us. Mind you, by this point, any audience would probably have torched the cinema and lynched the projectionist. It’s not subtle, it’s not entertaining — but boy, is it effective.