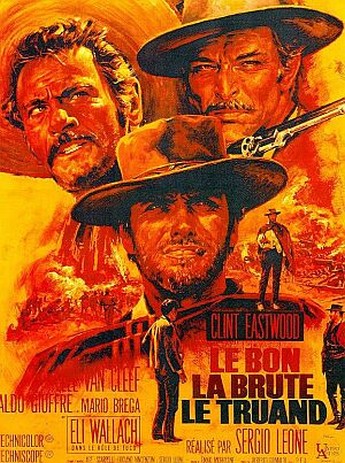 I’m going against the grain here, but I find this one the weakest of the classic trilogy. The main character is really Eli Wallach’s Tuco (the Ugly, in case you’re keeping track), but he’s really more of a sidekick and doesn’t deserve to overshadow Eastwood or Van Cleef. The latter, incidentally, is something of a revelation, spinning 180-degrees from his Few Dollars role, into a very nasty piece of work indeed. It was also hard to see the point of the lengthy Civil War subplots, which diverted from the central plot of three men who between them know the location of a treasure, but are useless separately.

There’s more than enough potential there, yet instead, Leone chooses to hammer away repetitively at the “war is hell” motif. I know that war is not very nice already (I sat through Black Hawk Down, f’crissakes…), and really don’t need to be told again. Least of all by a movie that, even in an edited version, is still over 160 minutes long. There’s a nice sense of moral ambivalence; “good”, as labelled here, is a very questionable terms, though perhaps only Wallach’s mother could disagree with his label. Morricone’s score is also remarkable and fits perfectly. Still, after the sublime delights of Few Dollars, it seems more than a little plodding and bloated.