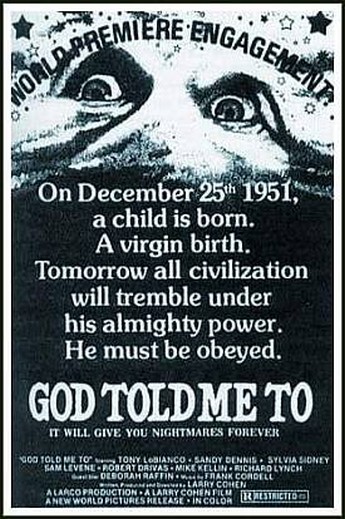 Somewhere out there, less in left field than about thirty rows back in the stands behind it, lurks this whacked-out SF-thriller. Det. Nicholas (Lo Bianco) is investigating a rash of killing sprees in New York, all committed by people who say “God told me to.” He finds himself wading ever deeper in a mystery stretching back decades, involving extra-terrestrials and abductions, that may come a great deal closer to home than is at all comfortable. Simultaneously, he’s dealing with a wife he hasn’t slept with in four years, a girlfriend who wants him divorced and a strict religious conscience.

There must be something about New York. Few film-makers would be mad enough to attempt this kind of mix; the only other who comes to mind is Abel Ferrara, another son of the Big Apple. Even fewer could pull it off, and Cohen doesn’t quite manage, leaving just too many questions unanswered to be truly satisfying. [Top of the list would be, what is the alien agenda and how do their human disciples fit in?] I also felt some scenes started in the middle of themselves, while the hero’s religious faith was discarded without explanation in the second half. No matter. This remains likely to annoy/offend almost anyone, even if it’s only seeing Andy Kaufman as a berserk cop. It’d be more than a decade before Communion by Whitley Strieber got the whole anal probe thing really going – Cohen was way ahead of the curve, and likely deserves equal credit.