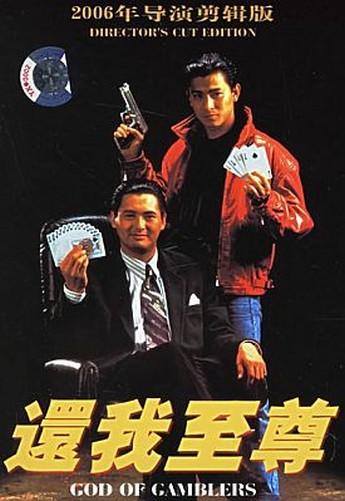 Kinda weird to think there was a time, albeit over 20 years ago, when it was cool and interesting to watch people play cards. Now, of course, televised poker seems as common as infomercials, and that does rob God of Gamblers of some charm. Fortunately, Chow’s charisma remains immensely watchable, smiling his way through his role as Ko Chun, a man who simply cannot lose, even after a bump on the head triggers amnesia and a regression to a childlike personality. Somewhat less appealing is low-life gambler Knife (Lau), who causes the bump but then shows his soft side, tending to Ko, and growing fond of him. Of course, when he discovers Ko’s skills, he takes full advantage, until the word gets out that the God of Gamblers is back – just in time for the climactic faceoff against Mr. Chan, who is prepared to cheat to beat Ko.

Though “cheat” is a somewhat nebulous term in this movie. Marking cards, say, is bad. But the (apparently supernatural) ability to change one card to another, as Ko does more than once, is fine. Moral qualms aside, it’s easy to see why Chow became a star, because his charismas as the God of Gamblers is incendiary. And yet, in the “idiot” version of Ko, he’s almost as charming, eating chocolate and buying balloons. The rest of the cast don’t stand out anywhere near as much, with Lau giving a one-note performance, and the lack of any real “nemesis” weakens the final reel, since we don’t have much reason to root against Mr. Chan. Director Wong has described himself as “semi professional at some forms of gambling,” and I do sense he’s probably more interested in them than I am. Still, between the cool cameo by Michiko Nishiwaki and the rousing finale, these are 125 minutes that largely whizz by, and it’s a nicely-populist Hong Kong film that doesn’t rely just on blood and bullets.

Back during the last-ever event at the beloved Scala Cinema in London, they brought Chow over for some screenings and a Q+A. I asked him which was the favourite of his films; he responded, “Which is your favourite?” “God of Gamblers,” I said. “Then that’s my favourite, too,” replied Chow. And this, ladies and gentlemen, is why he is the coolest man in the universe.

What we said then [10] Chow Yun-Fat is one of the few Hong Kong actors capable of gripping you without having to fly through a plate glass window to do it. Here (deep breath!), he plays the ultimate gambler (capable of throwing six dice and getting a total of five pips) who suffers amnesia after a blow to the head and falls into the hands of some low-lifes (with hearts of gold) who realise his potential but not the fact that the entire underworld is looking for him. Phew! It’s more unusual than your average revenge movie, yet also has enough action to keep things going. Chow Yun Fat is superb (as ever), both as the God and as the child he becomes following the accident, complete with a chocolate craving. Baccarat has never been more exciting. 9/10