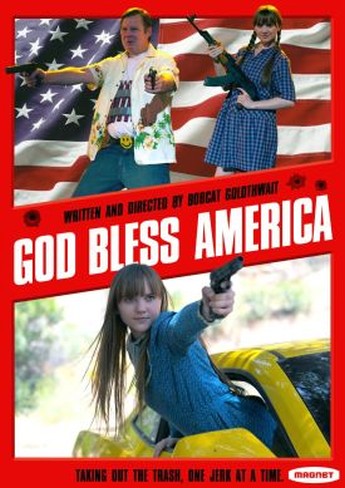 It’s been a long time since I’ve seen such an acerbic scream of cinematic disgust at the state of modern culture. Directed by the former star of the Police Academy series, this follows Frank (Murray – Bill’s brother), a polite, well-mannered man who is appalled by the crassness, rudeness and selfishness he sees in everyday life. Losing his job for a well-intentioned act of kindness, and told by the doctor that he has an inoperable brain tumour, he decides to go out after killing the vacuous star of a reality TV show, who epitomises everything he detests. But he’s dissuaded by one of her school-mates, Roxy (Barr), and the two opt instead for a killing spree that targets the rest of decadent society, from people who won’t behave at the movies through talk-show radio hosts, to the judges on a thinly-disguised version of American Idol. Along the way, there’s something to offend everyone – or make them nod in agreement – from a desire to off the cast of Glee, to describing Diablo Cody as “the only stripper with too much self-esteem,” on the way to an ending which, gratifyingly, does not pussy out in the way I feared it might.

Of course, it’s extremely scattershot – what, exactly, is the problem with people who high-five? – and the lack of any coherent philosophy robs this of some edge. There is no specific mission, be it left-, right- or anarchic, so in some ways, Frank and Roxy are no different from any run of the mill spree killesr; there’s not much sense of escalation either. However, these are minor flaws, which don’t stop it from being constantly engaging, and the tension between the likeable lead characters and their extremely unlikeable actions makes for a thought-provoking experience. There’s no doubt that writer-director Goldthwait is genuinely aggrieved, but the film has depths which are not necessarily obvious. For instance, Roxy’s hatred of Cody is down to Juno – except, there’s more than a passing resemblance, in personality, if not pregnancy. It’s contradictions like that, or Goldthwait’s assertion this is a “violent film about kindness”, which propel this forward, when the shock aspects have worn off.