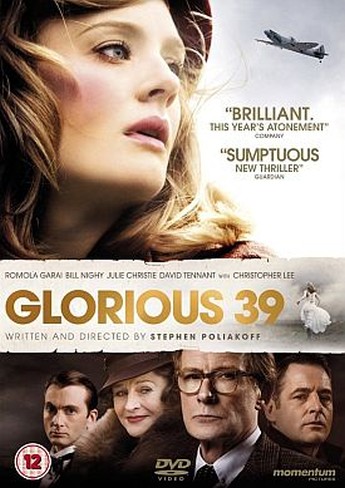 Part period-piece, part political thriller, this is stuffed full of Great British Actors – you’ve also got Christopher Lee, Jenny Agutter, David Tennant, Jeremy Northam, in far smaller roles than their status would typically demand. It takes place at the start of World War II, when there was a sharp, nasty divide in British politics between those who wanted to stand up to Hitler, and those who regarded a war as unwinnable and preferred appeasement. Anne Keyes (Garai), the daughter of an aristocratic Member of Parliament who is pursuing a career as an actress, finds herself unwittingly drawn into this battle, after a family friend apparently commits suicide, only for her to stumble across a recording that reveals his death may not have been as it appears. Anne tries to figure out what to do with the sensitive information, but as the bodies mount up, it’s apparent that the main problem is trying to decide who she can trust, even among her immediate family.

It’s a curious mix of genres, combing the clipped aristocratic traits of what Eddie Izzard referred to as the “arranging matches” genre of Britfilm (per Eddie Izzard), but with an edge obviously attempting to draw parallels between the justifications for war, then and now. The pace is really too slow for this to be effective. At almost 130 minutes, it could lose half an hour, and yet, would benefit from going deeper in to the suggestion that Anne is actually paranoid or delusional, suggested by one sequence where she loses the baby she is supposed to be watching. However, the talent level across the board is such that almost every scene is a pleasure to watch – Christie, as Anne’s slightly-mad aunt, is particularly enjoyable. And it’s this which outweights the movie’s undeniable flawws; for instance, the final dénouement doesn’t make much sense, with those who have shown themselves willing to go to any lengths, suddenly no longer apparently bothered about Anne. However, got to love a film where the warmongers are the good guys.