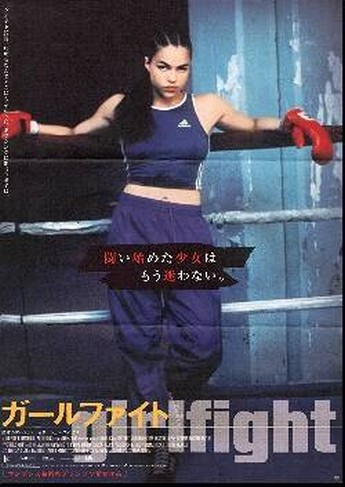 This world is filled with many examples of violence, and nothing works better than violence with a purpose. Diana Guzman is living in the projects in Brooklyn, a violent world that breeds school dropouts, juvenile delinquents and substance abusing, crooked low-lives, who couldn’t find a straight path if it were handed to them on a silver platter. It’s obvious to see how easy it would be to succumb to that lifestyle if one were not focused – luckily for her, she finds an outlet for her aggression in a gym as the only girl boxer, and not only develops confidence in her abilities, she becomes a force to be reckoned with, both outside and inside the ring. Eventually utilizing her talents in a “Gender Blind” bout, she learns many lessons about life, love and winning as well as losing. Michelle Rodriguez plays Diana and has probably the most intense gaze I have ever seen in my life. She looks as tough as she is; I certainly wouldn’t want to get her mad at me.

One aspect that I enjoyed was the gritty, realistic view of life and the ethnicity of that area. The background dialogues were excellent, despite the director not having a trace of Latino in her, and there was a very colorful blend of colloquial phrasing that will never be appreciated by most of the viewers. Only those that were raised in that atmosphere will pick up the undertones and that’s a shame. Still, a strong film, an impressive film, especially for a first time director and many first time actors, as well as a tiny budget. I was impressed, I was motivated and I was awed by the boxing scenes, which were not your usual boxing choreography. Instead, you were viewing the punches from the eye of the receiver and I know I backed up a couple of times to avoid getting hit by those power punches. This is definitely not Rocky. It’s all about the amateur world and their dreams of someday making it big. Of taking the violence to a different level. And mastering it.