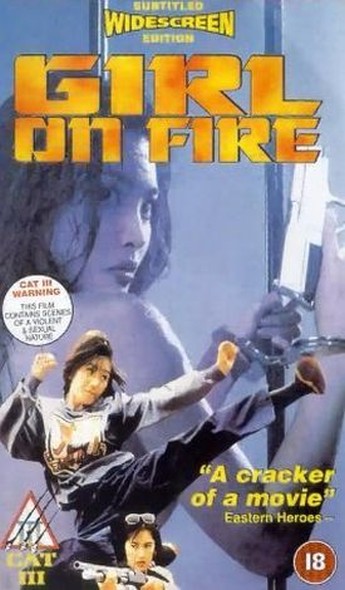 I have sat through more than my fair share of Hong Kong dreck, and have quite a tolerance for it, requiiring not eactly much in the way of coherence or acting ability for a film to be passable entertainment. Unfortunately, this failed to meet even those low standards, leaving me perplexed from the opening sequence, and bored almost immediately thereafter, when the softcore sex kicked in. The “plot,” and I use the quotes advisedly, concerns two Red Army terrorists, one of whom (Ng) is a) female, and b) a couple of sandwiches short of a picnic, with a fondness for biting out the throat of her partner during sex. They come to Hong Kong to buy weapons, which brings them into conflict with the local cops, who are willing to use any means necessary to bring them down. The terrorists hook up with a local gangster, who is possibly even more insane, and kidnaps one of the cops, in order to lure their partner into a trap at a building site,

In its defense, this does lead to quite a good battle, and some of the other action isn’t badly done. However, the other elements are so utterly weak as to render all the sex and violence almost utterly disinteresting. The gulf between this and any of the “good” Cat.III movies, such as Naked Killer or the sterling work Anthony Wong has done in the area, is obvious. Part of the problem may be down to crap subtitling, even by the low standards of early-90’s Hong Kong movies: this appears to have been the work of a disinterested dyslexic, and you can hardly blame them for their less than attentive work. I know I was drifting off before long. Cheung and Chow have decent reps, but you wouldn’t really know it here, Ng being the only one to make an impression, with a smouldering, evil intensity that came closest to regaining my attention. Operative words: came closest to. Save your time, and don’t bother with this one.