I must confess, I never thought the original was exactly crying out for a sequel, but whaddya know, even without Gary Busey reprising his role as a pissed-off confection, possessed by the spirit of a serial killer, this is a lot of fun, I’d say more so than the first installment. Do have to mention, though, that I believe in the existence of obviously-pseudonymous writer-director St. Croix, about as much as I believe in the Gingerdead Man. 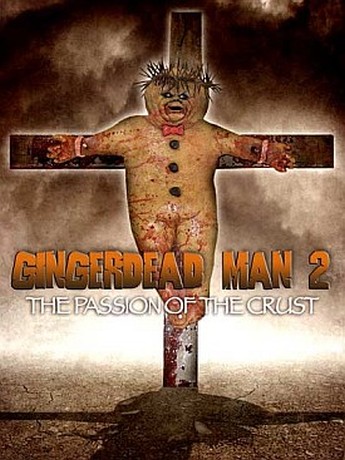 This time, the evil biscuit is wreaking havoc at the broken-down movie lot of Cheetum Studios, where Kelvin Cheetum (Kevan) is struggling to film Tiny Terrors 9: Purgatory of the Petite, in the face of peeved superstars, budgetary shortcomings, Internet critics and a terminally-ill kid in a wheelchair. So, the last thing he really needs is a murderous cookie rampaging through his cast and crew, slaughtering them in messy ways, with a foul-mouthed and mean-spirited quip: that is, of course, exactly what he gets.

The film does drift off towards more familiar – and, consequently, less interesting – territory towards the end, but redeems itself with… well, I momentarily thought of this as a spoiler, but given the poster, it hardly counts, so… with the crucifixion of the Gingerdead Man. It’s a moment of sublime, delicious blasphemy that could only be done in a renegade production like this. While undeniably highly self-indulgent, it quite restores my faith in low-budget movies and their ability to boldly go where no Hollywood blockbuster would dare tread.